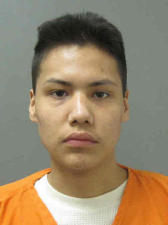 DES MOINES – On February 24, 2014, at approximately 4:52PM, the Tama County Communications Center received a 911 call reference a stabbing at 1695 340th Street Tama, Iowa which is located on the Meskwaki Nation Settlement. The Meskwaki Police Department, the Tama County Sheriff’s Office, and the Toledo Police Department responded to the emergency call. Upon arrival, law enforcement found 17-year-old Severn Daniel Jefferson unresponsive. It appeared to responding officers that Jefferson had been stabbed in the chest with a knife.

An autopsy will be performed by the Iowa Office of the State Medical Examiner on the body of Severn Jefferson on February 25, 2014. The cause and manner of death are still pending further investigation.

During the early morning hours of February 25, 2014, 20-year-old Jonathan Curtis Youngbear was placed under arrest for the death of Jefferson. He has been charged with Murder in the First Degree under Iowa Criminal code 707.2. Youngbear is currently being housed in the Tama County jail. Murder in the First Degree carries a mandatory life sentence without the possibility of parole.