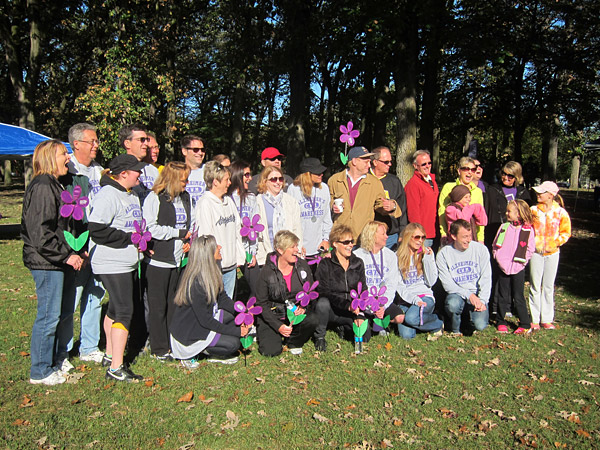 An enthusiastic crowd enjoyed a beautiful morning in East Park for a two mile walk in support of finding a cure for the terrible disease. The event, dubbed the “Walk to End Alzheimer’s” was organized by the Greater Iowa Chapter of the Alzheimer’s Association. The McManigal family was also instrumental in helping the vent become a success, said fellow volunteer Kay Rader.

“This is an incredible day,” Ms. Rader said. “We are especially thankful to the McManigal family, who have taken their recent loss, to join forces with us. We just want to find a cure for this terrible disease.”

Mark McManigal of California, and formerly of Mason City, attended the event in honor of his dad, Chuck, who recently passed away due to Alzheimer’s. Mark also lost two other family members to the disease, he said.

“Things are going very well today,” Mark said. “We lost my dad this past May, we lost our uncle in 2006 and we lost our grandmother in 1989 due to this. Hopefully we can someday find a cure for this.”

Mark also thanked his friend Theresa for helping with the event.

Unofficially, well over $10,000 was raised through the event.

The Alzheimer’s Association Walk to End Alzheimer’s is the nation’s largest event to raise awareness and funds for Alzheimer’s care, support and research. The event is held annually in more than 600 communities nationwide.