Marquardt thanks seniors for their support 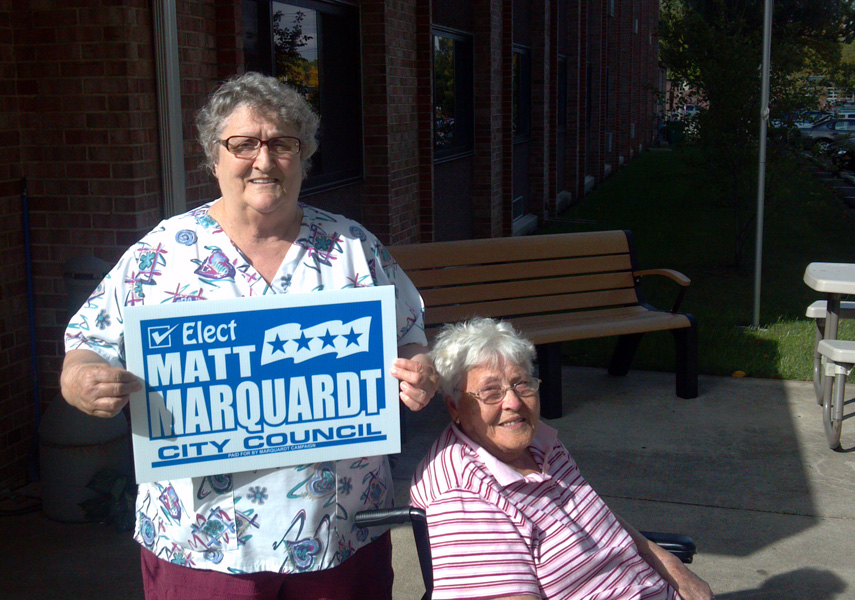 MASON CITY – In the wake of Mason City Mayor Eric Bookmeyer’s public onslaught against him, Fourth Ward City Council candidate Matt Marquardt immediately moved to disprove the mayor’s claim that he is not sincere in his devotion to elderly residents in the community.

“I was asked to come to the Shalom Tower Friday afternoon,” Mr. Marquardt stated.  “I spoke to my fellow residents, many of them seniors, and assured them that I am a sincere person who cares about our community and just as importantly, cares about them.”

Mr. Bookmeyer accused Mr. Marquardt of “preying on the elderly” among other name-calling tactics on a radio show and the local newspaper.  The mayor of Mason City even claimed that Mr. Marquardt didn’t care about his family.

“I’ve been overwhelmed with the reception since Wednesday,” Mr. Marquardt said.  “At first there was confusion with folks.  They didn’t understand what the mayor was doing; neither did I, exactly; I was surprised he did it, but then again, that’s just Eric being Eric.  I do know he has been on a negative spree against me since 2010 when I started to investigate City business and the wasteful spending at City Hall.

“Really, I’ve been disappointed with Mr. Bookmeyer and even Mrs. Solberg,” Mr. Marquardt said Saturday, referring to his opponent for office.

“Mrs. Solberg attempted to disrupt me as I raised funds for elderly War Veterans at Hy-Vee a couple of weeks ago.  Frankly, it was embarrassing,” Marquardt continued.

“I was at Hy-Vee West at the VFW’s request; they asked me to help them.  I had a coffee can and a basket with plastic flowers, asking folks to help our vet’s.  I raised almost $200.00.  The Hy-Vee Manager, Mike Winblade, came outside and told me a complaint had been called in, so he questioned me. He later admitted to me it was Janet Solberg who called and even came to the store in person to complain.  Later, I went back to the VFW and the fellas and I all had a good hearty laugh about the situation.”