Combat technology advances to save lives of American soldiers 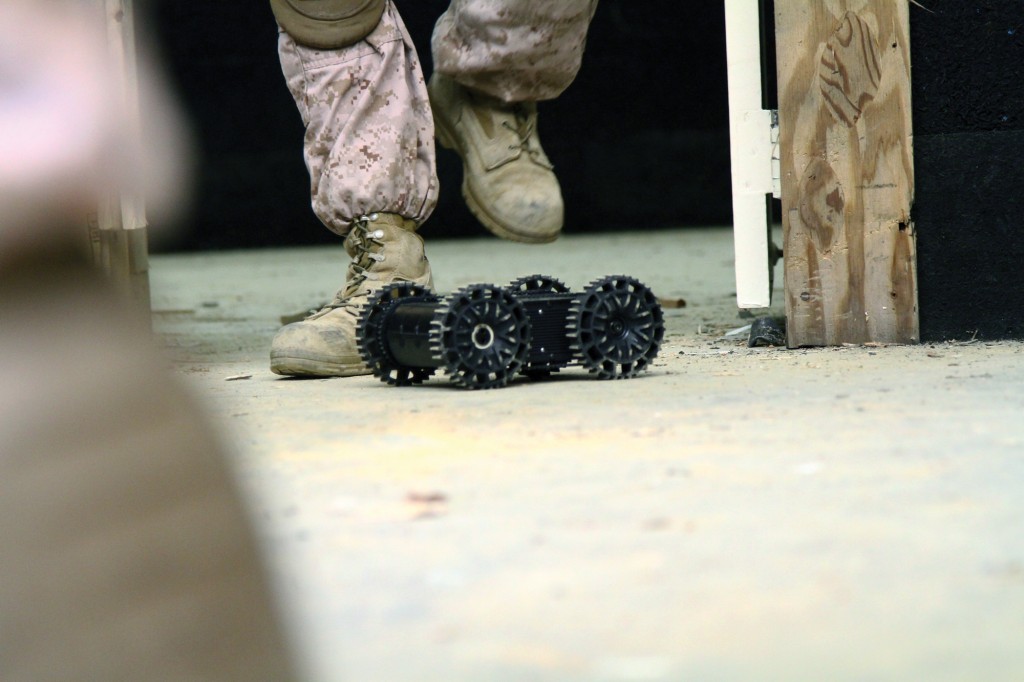 CAMP HANSEN, Okinawa — In recent years, there have been sweeping changes to combat technology designed to preserve the life of warfighters and provide a tactical edge. Recently those leaps and bounds have been in the field of advanced robotics.

The prototype is intended to assist teams during visit, board, search and seizure operations.

“The prototype system is designed to provide extra eyes on the ground for (Marines),” said Kurt Talke, a mechanical engineer with the Unmanned Systems Branch of the Space and Naval Warfare Systems Center Pacific. “The prototype is meant to be dropped through a window or tossed through a door, after a breach, so the ground forces can see what is in the room before entering. This allows troops to enter situations knowing exactly what is going on, in real time, instead of entering blindly.”

This prototype can aid in missions which require ground forces to search an enemy vessel for armament or possible combatants.
These robot prototypes, which resemble small radio-controlled cars, were put to the test on both days.

“This is a great opportunity for my guys to see how robotics are advancing to help the warfighter,” said Col. Sean Wester, the Special Operations Training Group commanding officer with III Marine Expeditionary Force Headquarters Group, III MEF. “The benefit from testing this prototype (gives the Marine Corps) a chance to evaluate what type of possible future missions these robotics systems can be employed.”

Commanders throughout the Asia-Pacific can contact Kate M. Mangum, the III MEF science and technology advisor, when the need arises for systems like the Stingray. Mangum is the link that connects the operators with the right people and organizations who can develop new cutting-edge systems.

“I bring visibility and expertise on new technologies being developed by the Naval Research Enterprises,” said Mangum. “My goal is to get the developers in Washington, D.C., to understand the needs of III MEF and inform its leaders about potential solutions to their technological needs.”

The Stingray MUGV system comes with two vehicles and a user control unit. It weighs just over 12 pounds, and the vehicles are equipped with a controllable camera, infrared systems and a flashlight. The system’s design allows the vehicles to be tossed or dropped short distances, as well as perform limited actions in aquatic environments.