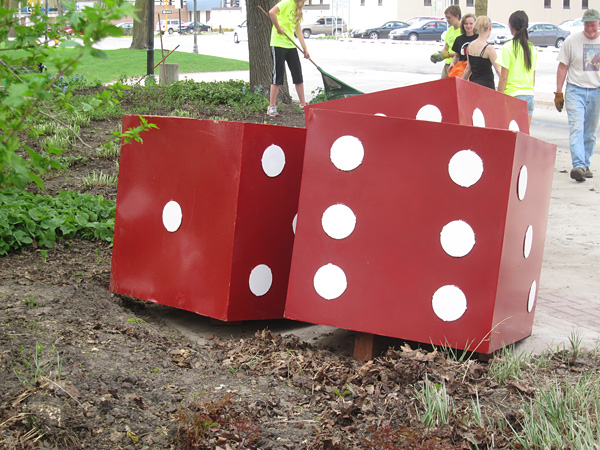 MASON CITY – In what many in town are now saying is another case of “Robin Anderson gone wild”, the woman who seems to own a blank checkbook at City Hall had a perennial flower garden tore up last week so that a red gambling dice sculpture could be installed across the street from City Hall.

Mason City resoundingly objected to a casino within its borders several years ago – that project was chased to Northwood – but red gambling dice are apparently just fine, as sources tell NIT that Mayor Eric Bookmeyer, the City Council, and the Park Board had no knowledge beforehand that Anderson intended to bulldoze part of Central Park to install a gambling dice sculpture.

Wednesday afternoon, children from the North Iowa Youth Task Force were in Central Park trying to clean up the garden and fix damage done when Anderson commandeered city workers and brought her “volunteers” to the public park and wreaked havoc on the flower garden.

Kitty Clasing, the president of Gardeners of North Iowa, told NIT that several dozen flowers were destroyed when Anderson brought heavy equipment to the site to clear away the flowers and dirt so that a cement pad could be installed for the gambling dice installation.  Clasing’s volunteers have worked for years on the garden to make it beautiful.

In another shameful display of reporting, the Globe Gazette referred to the sculpture as “yahtzee dice” despite the fact that yahtzee dice are white with black dots.  The sculpture in Central Park is three red dice with white dots, just as typically found in casinos.

Clasing is hoping that the sculpture can be moved, and told NIT that a meeting will be held in about a month to resolve the matter.