This news story was published on March 31, 2013.
Advertise on NIT • Subscribe to NIT

MASON CITY – An alert Mason City police officer led to the arrest of a Polk County man suspected of stealing a car.

According to the Mason City Police Department, shortly after 4 PM on March 30th, a Mason City police officer noticed a vehicle parked near State Street and Jefferson Avenue.  The vehicle was occupied by Jacob Aves, 18, of Polk City, Iowa.  During contact with Aves, it was discovered that Aves may have taken the vehicle without permission from the owner.

The Ankeny Police Department was notified and they met with the owner of the vehicle at his residence.  Investigation by Ankeny police showed that Aves knew the owner and had been a recent guest at the car owner’s residence.

Aves was arrested and taken to the Cerro Gordo County Jail and held on $2,000.00 bond. Aves was charged with operating without owner’s consent (aggravated misdemeanor), theft in the fifth degree, (simple misdemeanor) and possession of a controlled substance (serious misdemeanor).

Aves received a deferred judgement in 2012 for attempted 3rd degree burglary of a vehicle and place on 2 years probation.  Possession of burglar’s tools was thrown out, and possession of a conrolled subtance charge was also deferred.  Aves still owes $1105.00 in court costs and fees.

Aves was also found guilty of reckless driving late in 2012.  He still owes $357.50 in court costs and fees in that case. 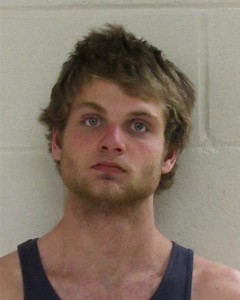