EDITORIAL: Globe Gazette proves today it is no longer a cornerstone of truth and justice 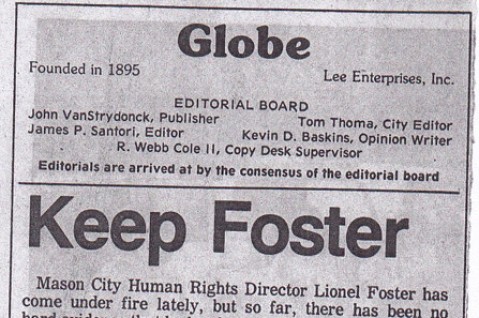 If you read my publication NorthIowaToday.com, you are fully aware that I am not a fan of the Mason City Globe Gazette newspaper.

I have editorialized for over 2 years that the Globe is now an operation in a free fall from its once-lofty perch as a respected media that will do anything for an advertising dollar and does not work hard for the truth.  This was the cornerstone to my motivation to create NorthIowaToday.com.  I knew that by providing hard-hitting truth and coverage to local events – NorthIowaToday.com would be different.

It is my opinion that the Globe Gazette will cheat its readers – what is left of them – to further the cause of the so-called rich and elite in Mason City to stay in the good graces of the business community. As a former employee, I know the pressure Globe management faces every year to “make the year” and turn in a bottom line that Lee corporate can appreciate. This pressure has corrupted and destroyed our newspaper.

Today, February 10th, 2013, the Mason City Globe Gazette published an editorial that stated “we agree with a decision by the council to cut the Mason City Human Rights.”  You can read that editorial here.

Only days ago, I received from a third party an old newspaper clipping.  That newspaper clipping – shown below – is an editorial published in the Mason City Globe Gazette on March 20th, 1988.  Just about 5 weeks shy of 25 years ago.  A different time in Mason City – and as you will read, a different time at the Globe Gazette.  In this editorial, the Globe Gazette Editorial Board strongly advocates for keeping Human Rights and Director Lionel Foster’s Department fully intact.

The Globe Gazette has now sold out the poor, the down-trodden, and the mis-treated one final time to bow to its elite masters who want Human Rights out of Mason City.  Read both Globe Gazette editorials and form your own opinion.

25 Responses to EDITORIAL: Globe Gazette proves today it is no longer a cornerstone of truth and justice