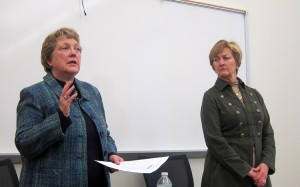 MASON CITY – Legislators Sharon Steckman and Amanda Ragan took questions from the public on the proposed cutbacks to Human Rights from Mayor Eric Bookmeyer and the Mason City Council.

“Bookmeyer has continually gone after this office,” said Mason City’s Peter Children, naming a gauntlet of moves instigated by Bookmeyer in bringing the agency down.

Senator Amanda Ragan indicated again, as she has done previously, that she believes in local control of services, versus sending North Iowa folks south to Des Moines for help.

Both Steckman and Ragan indicated they would not get involved in the matter. Both are Mason City residents and said they would not attend a City Council meeting to voice concern.

“This is an issue… you need to talk to the City Council about,” Sharon Steckman said. “Ask them.”