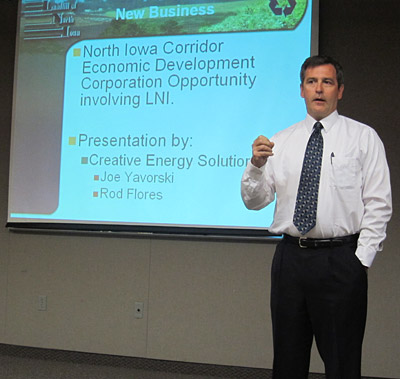 It must feel like deja vu for Joe Yavorski.

Yavorski and his company, sometimes known as Creative Energy Systems (CES), other times referred to as Energy Recovery Specialists (ERS), continue to fight on to build a trash-to-energy plant after being denied here in North Iowa earlier last year.

Yavorski has even built a new website for his endeavor, although there’s not much on it.

After losing a very close battle in North Iowa to get his first trash-to-energy plant built, Yavorski is at the same crossroads in Fort Morgan, Colorado as he once was in Mason City.

The Fort Morgan Brush Tribune reported on January 16th that the Fort Morgan City Council had signed a memorandum of understanding with Yavorski’s CES to build a “waste-to-energy plant as soon as in 2014 that would create 40-60 new jobs.”

This was similar rhetoric to what we heard in Mason City, where Yavorksi and Rod Flores of CES-ERS proposed a plant that would employ about 50 people.  The Mason City Council that took office in 2012 was tentatively in agreement with the proposed plant, and using all of the political capitol Mayor Eric Bookmeyer could muster, sent City Administrator Brent Trout and City Councilman Scott Tornquist to fight for approval at the North Iowa Landfill Board.  Bookmeyer called the project “exciting” … a consultant said CES-ERS financials “didn’t pass the sniff test.”

CES-ERS faces similar obstacles in Fort Morgan as it did here in North Iowa, where a range of boards and commissions at several levels must approve the plant.  Ultimately, the trash-to-energy plant failed in Mason City when the North Iowa Landfill Board narrowly voted against partnering with Yavorski and ERS.  Bookmeyer had thrown everything but the kitchen sink at this deal, but his political capitol failed him miserably.

Yavorski and Flores (and City Hall), in their attempt to sell the project here in North Iowa, had touted a trash-to-energy plant in Green Bay, Wisconsin as a development that was moving forward using the same technology as the proposed plant in Mason City.

But, the Green Bay City Council later pulled the project’s permits, and the developer, Oneida Seven Generations Corporation, sued the city to have the permit restored.

It was reported on January 9th by Fox 11 News in Green Bay that a judge has upheld the Green Bay City Council’s decision to pull the project’s permit and it appears the plant might never be built.

“Some (Green Bay) city council members felt mislead by the initial plans, which among other things did not include smoke stacks,” Fox 11 reported.  The final plans did include smokestacks and a community uproar ensued.

Another supposed crowning achievement that Yavorski and his North Iowa backers had touted was a partnership between CES and Lockheed Martin on a $2 billion project in Antarctica.

Thanks to a January 2nd, 2012 story in the Globe Gazette trumpeting this partnership (prior to the ill-fated vote at the landfill) countless other media publications ran with the story and announced that Yavorski’s CES would be working in Antarctica with Lockheed on this major project.  The Globe Gazette seemed to base their January 2nd story only on an interview with Yavorski.  It now appears the Globe Gazette pulled the January 2nd story from their website.  On January 4th, 2012, the Globe wrote what was essentially a retraction, coming clean and writing that Yavorski was actually still negotiating with Lockheed to be a part of the Antarctica project and nothing was final.

This weekend and today, I was able to speak with Lindsay Wilson, a Senior Communications Representative  – who has been with with Lockheed Martin for over 5 years – and ask her to confirm any involvement between CES and Lockheed Martin in the Antarctica project.

After checking, Wilson called my office Monday morning to confirm that in the end, CES has absolutely no involvement with Lockheed’s Antarctica project.

Good luck in Colorado, Joe.  If it works out there and turns out to be safe and a benefit to the Fort Morgan community, come back and see us.