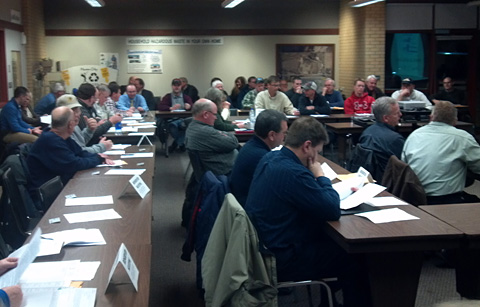 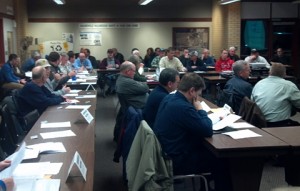 MASON CITY – A consultant told the North Iowa Landfill (LNI) Board Thursday night that the financial figures he looked at for the proposed Creative Energy Systems (CES) plant “didn’t pass the sniff test.”

The consultant, Curt Hartog of Foth Infrastructure & Environment, LLC out of Lake Elmo, Minnesota, gave a presentation to the board (pictured) and outlined some of the pros and cons that the LNI could expect if it entered into a contractual agreement with CES.

Hartog pointed out during his presentation that the LNI would only be able to supply CES with 90 to 133 tons of trash (sometimes called municipal solid waste) per day. CES has said repeatedly that it will run 7 days per week and need 250 tons of trash per day. CES would convert the trash to syngas using a process called pyrolysis. The gas powers turbines that create electricity that is then sent to an Alliant Energy substation located adjacent to the proposed CES plant location on 43rd Street in Mason City.

Watch Hartog’s presentation to the LNI Board:

When asked for clarification on the statement “didn’t pass the sniff test,” Hartog told NorthIowaToday.com that he had done a “basic financial analysis of the CES operation based on the stream of trash the LNI could offer CES. “They (the LNI) don’t have the amount of trash they (CES) need. That, and no tipping fees are collected by CES. They are borrowing $35 million. It doesn’t add up. They would be running deficits every year.”

CES has said they need 250 tons of trash per day to generate the 10 megawatts of power they intend to sell to Alliant Energy.

A question and answer session ensued after Hartog’s presentation. Several anti-CES project citizens asked questions of Hartog. They pointed out that the LNI would not be able to supply the amount of trash that CES was requiring.

Larry Elwood of Mason City said that the “hill” at the landfill was getting bigger. “It really is one of the biggest hills in Mason City,” he said, and urged the board to take a good look at the project.

Newly-appointed LNI Board member Scott Tornquist urged the LNI Board to move forward and make a decision on the agreeement with CES on or before January 26th. “If the (CES) project fails, there’s no risk to anybody in North Iowa,” he said. “It’s not our problem if we can’t supply enough trash.”

“The environmental concerns have been addressed,” Tornquist continued. “I don’t see where there is any risk or any genuine concern that we should have at this time.”

Watch Scott Tornquist address the LNI Board before more discussion of the contract takes place:

Tornquist urged the board to look over the agreement during the meeting, and give any concerns it had to LNI’s legal counsel, James Locher. The ensuing discussion turned testy at times, and Tornquist became visibly agitated as some board members expressed concern over the contract.

One board member said “we just got this.” Another said “you can’t even buy a house in two weeks.” Another said “I just feel like this is being shoved down our throats.” LNI attorney James Locher said “I would prefer to have several months for something of this magnitude. There will be considerable backing and forthing on this… that’s a difficult thing.”

Watch video of board members discuss the CES contract:

One of the key terms in the agreement is for a contract term of ten years and CES has an option for another 10 year term. So, the LNI could be bound to CES for a period of 20 years. Some board members pointed this out as a concern.

As some board members began to ask if they could be given more time to look over the contract, and if their legal counsel could also be granted more time to negotiate terms, Tornquist said “Look. There is no two or four month option here. There is a two week option or no project.”

All agreed that CES should have brought the agreement to the landfill board much earlier for consideration, if time was of the essence, as Tornquist stated.

Yet more concerns were voiced with the CES contract. Locher had misgivings about an LNI employee working at the CES plant due to liability reasons. Another board member had concerns about rates for trash collection going up. Another questioned who would pay for various expenses, like hauling the residue from the CES plant to the LNI. Another board member questioned whether communities would enforce the 28E agreements that say that those communities should bring their trash to the LNI. Still another board member said “I don’t want someone sorting through my trash. What if I forget to shred an important document?”

On the positive side, Hartog said lowering the amount of waste buried at the LNI would extend it’s life a number of years, perhaps up to 30. It was also said that the LNI would not lose any tipping fees. Tornquist said no LNI employees would be let go. CES has promised over 50 new jobs at its plant. Eventually, CES would pay taxes on its property and benefit Mason City with those dollars.

It was finally agreed by the board that at a meeting in February (instead of January 26th) the LNI Board would meet and decide on the CES contract.

More details to come on this developing story.