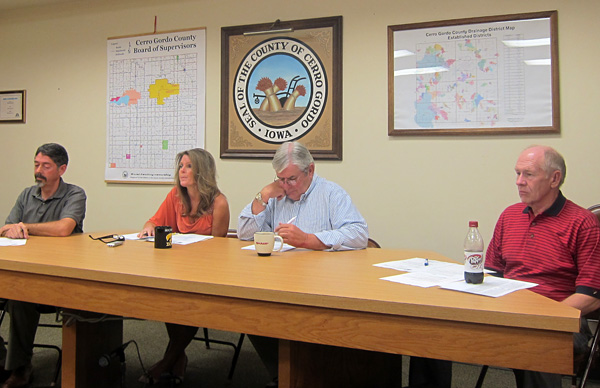 MASON CITY – At today’s Cerro Gordo County Supervisor meeting, County Engineer Mary Kelly told the board that there are “deficiencies” in new asphalt that has been installed on a 3 mile stretch of Highway B-20 north west of Mason City.

Cerro Gordo County Supervisors awarded a contract for the project to Heartland Asphalt last May.

“B-20 should be wrapping up, hopefully getting it open this week,” Kelly said today.

The issue was not touched upon in any way in the meeting agenda and was only revealed when Supervisor Jay Urdahl asked Kelly “How’s B-20 coming?”

“We’re working on trying to reconcile our issues on some of the deficiencies, and I had sent George (Jesson) that letter, so … we’re trying to figure out what the best method is … like I said if we go with a (inaudible) we want to make sure we can put a value to that.”

I spoke with Ms. Kelly on the phone today regarding the issues with the new asphalt that has been installed on B-20.  She said the asphalt “didn’t meet the requirements … the county may not pay the full amount” of the $1.8 million contract.

Kelly described the deficiency in the asphalt as “didn’t meet the density requirements.”

The county tests the asphalt after it is installed, taking what Kelly described as a “core” sample.  The contractor also performs tests under the supervision of the county, Kelly explained.

I asked Kelly how bad the deficiencies are.

“Not too bad.  These kinds of things happen frequently in construction projects,” she said.

Pressed further, Kelly said “I don’t think so,” on whether she thought the road would break down before its 25 year life span is up.  “Not to this extent,” Kelly said when asked if this kind of deficiency had ever happened in Cerro Gordo County.  “This time is a little higher.”

“We’ve been in touch with the Iowa DOT,” Kelly said, “and we are talking to experts” about how to proceed.

A message left for Heartland Asphalt President George Jesson was not immediately returned.

A request for the letter sent from the county engineer to Heartland Asphalt was made in writing this afternoon.  The county would not release the letter until the county attorney makes approval of the request.

More information on this developing story as it becomes available.