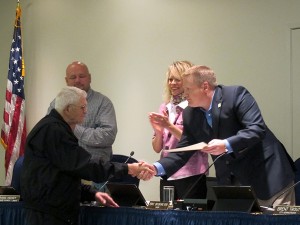 Earl Opheim receives a Certificate of Recognition from Mayor Eric Bookmeyer on Tuesday, September 18th, 2012 for his service on the U.S.S. Haggard in World War II.

Opheim was a crew member of the U.S.S. Haggard DD 555, a destroyer from World War II, fighting battles in the South Pacific area against Japan.

He hosted a reunion of crew members in Mason City this year, it’s 25th annual, and it will be the last.

“The most difficult for him to relate is the story of the Haggard being attached by a kamikaze fighter plane,” said another Haggard crew member, Bud Weigand, on usshaggard.com. “During that bombing, he not only lost many shipmates, but he lost his best friend.

“It is still very emotional for me,” says Bud. “It’s really hard to talk about it.” As he relates the facts about that terrifying day that left an indelible mark on his life, he speaks slowly, keeping his emotions in check.

“We were on picket duty (forming a circle to shield the fleet) around sundown,” he says. “We knew that we were going to be under enemy fire, so we sat and waited. Then the kamikazes came and a bomb went through the ship’s hull. It hit the reduction gears, and there was a huge explosion. It killed 13 men, blew out the three bulkheads, and all that was left in working order was about a fourth of the ship.”

The U.S.S. Haggard should have sunk. Robbed of all power, the ship was dead in the water, says Bud. But after the territory was secured, the U.S.S San Diego threw them a line, took off the wounded and towed the ship to a nearby island.

Opheim’s certificate says “In recognition of your valiant service to the United States of America and to commemorate your last reunion in the City of Mason City, Iowa.”