Where was Jean Marinos Tuesday night? 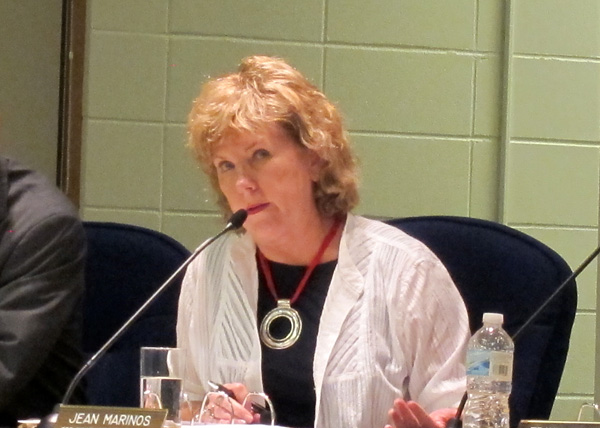 As City Council member Jean Marinos was again absent from another council  meeting, City Hall is being tight-lipped on her whereabouts that evening.

Knowing of Marinos’ chronic refusal to have any contact with NIT, dating back to 2011 during her campaign for the council, I first asked City Hall why Marinos was absent.  I was referred higher up the chain as I asked questions.

City Clerk Diana black referred me to City Administrator Brent Trout, saying “I’m not sure you would have to ask Brent.”

Trout, when asked why Marinos was absent, said “You should really ask Jean and not me about why she was absent from the meeting.”

Later, Trout said “Council members are not required to have a reason for being absent. They can attend when they please.”

Can’t blame you, Brent, I wouldn’t snitch on my boss, either.  Actually, yes I would, but you all know that.

I called Jean Marinos’ cell phone at 641-201-0002 and the call went directly to voice mail. I also emailed her at her council email address. I am awaiting a reply from both messages I left.

A call to American Realty, where Marinos works, was answered by a secretary who told me that “you should try back after the 25th.”

The Iowa Ombudsman office was nice enough today to explain that “there are some laws and ordinances that require a certain minimum of attendance (for elected officials), depending on the type of government agency it is.  If they are chronically absent, that could be grounds for a removal action.”

Now, I have a hunch Jean is tanning herself on the shores of Europe at this time, but of course, I can’t be sure since no one will tell me where one-seventh of our city leadership is.  I just hope she is OK and using plenty of sunblock.  Jean, if you are out there and can read this, please put down your martini and phone in before someone puts your picture on the side of a milk carton.  In the meantime, the rest of us will figure out the Mercy quagmire and other city business.  Oh, and don’t worry, your paycheck will be in the mail as usual.

I was able to speak with Council member Travis Hickey about the issue of attendance at public meetings today via phone.

Hickey explained that if he is going to be absent from a public meeting, he calls and tells City Hall.

“I call and tell them if I am going to be gone,” he said. “We were never told we have to do that.

“I honestly don’t know why (Jean) was gone” from the Council meeting, Hickey said, “but I’m sure Brent Trout knows.”