Council to vote on “encroachment” of sculpture pedestals

MASON CITY – The Mason City Council will vote Tuesday night on a permanent encroachment permit that would allow the placement of four sculpture pedestals in the right-of-way in downtown Mason City.  The pedestals would support a rotating collection of sculptures. 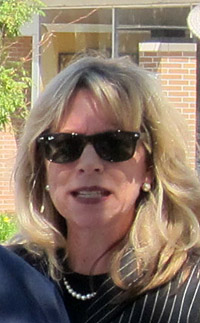 Robin Anderson lead a “non-profit” group in securing $40,000 of public money for sculptures in downtown Mason City, some of which will be placed near her offices at the Commerce Center, which was also renovated with hundreds of thousands of dollars in public funds.

The Mason City Council, with a 6-0 vote, already awarded a “non-profit” group led by Mason City Chamber of Commerce Director Robin Anderson (pictured) $40,000 of public money for the project.

A total of 25 sculptures will be installed throughout the “cultural crescent” downtown area, some of which will be placed very near to Anderson’s office at the Commerce Center, which was renovated using hundreds of thousands of dollars in public funds.

Other local business leaders that received hundreds of thousands of dollars in public assistance to grow their businesses recently helped Anderson choose locations for the sculptures, near their businesses.

According to a City Hall memo written by City Administrator Brent Trout, the first four locations are:

Trout’s memo says the pedestals will be placed so they do not interfere with visibility at intersections, inhibit pedestrian access, interfere with vehicle doors and obstruct fire lanes near the north entrance to Southbridge Mall.

Pedestals for the additional sculptures in the right-of-way will require additional review and approval by the City Council. 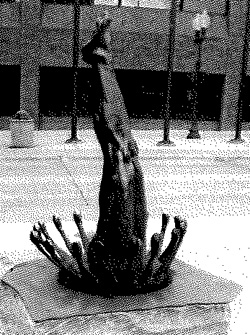 A sculpture coming to Mason City.

5 Responses to Council to vote on “encroachment” of sculpture pedestals