Isaac largely spares South Florida, but is expected to gain strength in Gulf 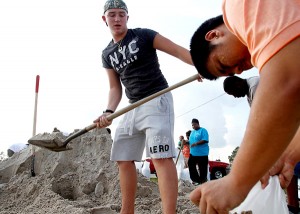 Tropical Storm Isaac huffed and puffed but blew little down other than palm fronds, branches and random trees. It frustrated fliers with hundreds of cancelled flights, sunk a few boats in the Keys and sparked scattered power outages across South Florida, imperiling the chili-pepper-flavored ice cream at one Homestead shop. But there were no reports of serious damage or flooding.

(PHOTO: Johnny Plair, right, helps Will McLeod fill sand bags for his mother’s Biloxi, Mississippi home on Sunday, August 26, 2012, on Lorraine Road in Gulfport. The Harrison County Board of Supervisors provided the sand for citizens in need to make their own sand bags.)

Unfortunately, Isaac was not expected to remain meek. The National Hurricane Center expects the sprawling mess of squalls that swept South Florida to morph into a wicked 100-mph storm, possibly stronger, bearing down on the Gulf Coast by Tuesday. Its target remained uncertain but a swath of vulnerable low-lying coastline from the eastern Panhandle to Louisiana, including the city of New Orleans, was under a hurricane watch.

At 11 p.m., forecasters said Isaac continued to move west-southwest after slipping just under Key West into the warm Gulf of Mexico. Its sustained winds remained at 65 mph, but it was expected to strengthen.

For South Florida, under a flood watch through Monday evening, Isaac’s broad tail of rain could continue to remain a headache. But the storm largely amounted to what Miami-Dade Mayor Carlos Gimenez called a practice run for a region that dodged its first hurricane strike since Wilma in 2005. Forecasters had predicted it might hit the Keys as a Category 1 hurricane.

“It’s a good thing. We prepared for the worst,” Gimenez said. “Obviously we’re not going to get the worst. It’s a relief.”

Though damage appeared to be minimal, school and other closures in Miami-Dade, Broward and Monroe counties remained in place. Emergency managers urged residents to head out cautiously, if at all, so workers could clean up debris and check equipment.

Outside Key West’s ramshackle Schooner Wharf Bar, a bearded bicyclist pedaled by, wearing a rain poncho and hooting a sentiment about Isaac widely expressed across the Keys, where locals shrugged off the threat.

“It’s not a hurricane,” the cyclist called out. “It’s a windy day in paradise.”

The single damage report to the Monroe County Sheriff’s Department: a tree that fell onto the stairs of an unoccupied home on Big Pine Key.

At St. Mary Star of the Sea Catholic Church in Key West, home of the Grotto of Our Lady of Lourdes, where locals have long gone to pray to be spared from hurricane devastation, the Rev. John Baker said, “All we know is, it wasn’t what it could have been. I’m so grateful.”

It also grounded some 760 flights in and out of South Florida: 550 at Miami International Airport and 160 flights at Fort Lauderdale. Key West’s airport was closed all day, forcing cancellation of about 50 flights.

In Haiti, meanwhile, the death toll continued to grow and officials were still assessing widespread damage.

At least eight deaths were reported in Haiti. The deaths included a young man killed in a landslide in DonDon, a town in northern Haiti, and a 10-year-old girl who was killed when her home collapsed north of Port-au-Prince.

In the tourist town of Jacmel, in Haiti’s southern peninsula, the damage was pronounced. Houses were still standing but crops, and livelihoods, were washed away.

Isaac’s encounter with Haiti weakened the storm and, tracking near the coast of Cuba for much of Sunday, it failed to pull itself into a hurricane before it approached South Florida. Top wind speed in the Keys was a 70 mph gust measured at 2 p.m. at the Smith Shoal Light about 11 miles northwest of Key West. Gusts of 66 mph were recorded at Virginia Key in Miami and 64 mph at Port Everglades in Fort Lauderdale.

But the worst was over pretty early, as Isaac’s track shifted to the west and the storm accelerated. Rather than getting stronger as it moved off Cuba, Isaac weakened a bit as its center skirted just south of Key West after a meandering journey across the Caribbean.

David Zelinsky, a meteorologist at NHC, said the storm hugged Cuba closely enough to disrupt its formation but it will fuel up on the warm Gulf of Mexico and there is nothing in the atmosphere likely to beat it down.

“It may take a little longer to become a hurricane but we’re still forecasting that,” he said.

Zelinsky cautioned Isaac could be stronger than the Category 2 now forecast. Pinpointing intensity is difficult, he said, and the average error two days out is a full category, plus or minus. The worst damage could come via storm surge, which could reach six to 12 feet on the stronger, right side of Isaac.

There also was considerable uncertainty about its path along the Gulf Coast. “Two of our best performing models are at opposite ends of the spectrum,” said Zelinsky. “One turns it farther right toward Florida, the other goes left.”

Either way, both scenarios suggested a nasty couple of days in Tampa, scene of this year’s Republican National Convention — no direct hit but a possible storm surge and certainly rain and tropical force winds.

Florida Gov. Rick Scott canceled a Monday speech at the convention and cleared his calendar to deal with Isaac, wherever it struck.

“We may need to help out other states,” he said.

In Homestead, Fla., where Isaac’s heaviest rains fell — upwards of 4 inches — officials appeared to breathe a sigh of relief that Isaac had not caused greater harm, particularly to the city’s significant agricultural industry.

Winter is the busiest season for Homestead’s farmers, but there are still avocados in the groves. Heavy rains can kill avocado trees, and gusty winds can knock the fruit to the ground.

But the storm appeared to cause more damage to small business owners than to farmers.

At about noon, power went out along Washington Avenue in downtown Homestead, where small shops cater to Mexican, Guatemalan and Central American customers.

About 400 homes and businesses were affected by the outage, among them La Michoacana ice cream shop.

Miguel Chavez, manager of the shop, said he expected losses in the thousands of dollars. The shop has a 10-by-8 foot freezer, as well as display cases filled with ice cream, including flavors not typically found in stores, such as chili pepper.

“Today is a day the hurricane threatens our business,” Chavez said after the power outage. “You can’t fight against nature.”