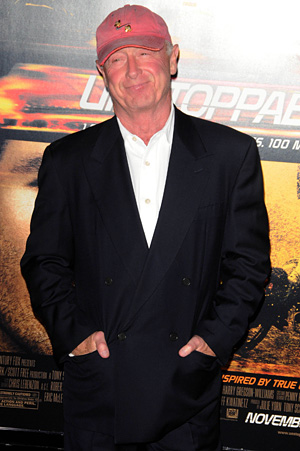 His body was pulled out of the water by Los Angeles Port Police, who were the first on the scene.

Several witnesses told police they saw Scott get out of his Toyota Prius, which was parked on the bridge, about 12:30 p.m. Then he scaled an 8- to 10-foot fence and jumped off without any hesitation, law enforcement sources said.

A source said officials looked inside the car and determined it belonged to the famed action-movie director and producer. A note listing contact information was inside. A suicide note was later found in his office. Its contents were not revealed.

Scott was a respected director and producer who made “Man on Fire,” “Enemy of the State” and “Beverly Hills Cop II.” The last film he directed was “Unstoppable,” a 2010 thriller about a runaway freight train.

His career in television included executive producing the series “The Good Wife” and “Numb3rs,” both on CBS.

The British director, who lived in Beverly Hills, was best known for the 1986 hit “Top Gun,” starring Tom Cruise as a Navy aviator. The movie grossed $21.6 million in its first 11 days of release.

Scott was one of three sons born to working-class parents in northern England.

He established his career as a commercial director and continued to make television spots late into his career. Before becoming a filmmaker, Scott was a painter.

Distinguished by a kinetic visual style that aimed to take audiences into his high-octane action scenes, Scott also produced a number of blockbuster movies, most recently “Prometheus,” directed by his brother, Ridley Scott.

At the time of his death, he had recently completed filming on “Out of the Furnace,” a drama he was producing about an ex-con starring Christian Bale. The movie is set to come out next year.

Scott was also in the midst of preparing to produce a science-fiction drama called “Ion” and had served as executive producer on “Stoker,” set to come out next March.

While his movies were consistent box-office hits, he rarely attracted critical praise and was never nominated for an Academy Award.

He was more successful with reviewers in television, however, for his work on “The Good Wife.”

Simon Halls, a spokesman for Scott’s family, confirmed the death and said the family asked “that their privacy be respected at this time.”

Scott was married three times and had twin sons with his third wife, actress and model Donna Wilson.