American Apparel struggles to make it in America 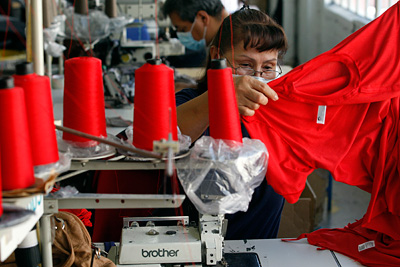 LOS ANGELES — Ofelia Lopez scrutinizes the hem on a hot-pink shirt fresh off the assembly line, making sure the stitching is just right. All around her, rows of workers rapidly attach sleeves, adhere labels and churn out piles of garments.

Lopez, a Guatemala native, has worked in the apparel industry for 22 years. Now a team supervisor, she keeps a watchful eye on her group toiling on a vast factory floor, where the whir of sewing machines and the hiss of industrial steam irons drown out most other sounds.

This could be a clothing factory in Guatemala, China or Vietnam. But it’s in an industrial area of downtown Los Angeles, where American Apparel Inc. is engaged in an epic — and, so far, money-losing — struggle to prove that clothes can still be made for a profit in America.

The company’s seven-story factory, a former Southern Pacific Railway freight depot, is the biggest garment-making facility in the U.S., according to an industry trade group. Here, 4,500 workers staggered over two shifts cut, sew, fold, box and ship clothes to the company’s 253 stores and other clothiers worldwide.

American Apparel may be best known for its hip stores, racy ads and controversial chief executive, Dov Charney. But this factory and the thousands it employs are what truly make the company stand out, said Sarah Y. Friedman, executive director of the National Association for the Sewn Products Industry. Few other U.S. clothing manufacturers employ more than a few hundred workers, she noted.

“American Apparel is very, very remarkable,” she said. “Any time you have a retailer with thousands of employees still in the U.S. — that is pretty remarkable.”

At the helm is Charney, 43, an outspoken advocate for local manufacturing who founded the company 14 years ago. In a recent interview he acknowledged pressure from other company executives, board members and consultants to move manufacturing abroad.

Charney conceded that the company’s finances could eventually push it to start making some products overseas.

“To say that I’m never going to import from overseas would be unreasonable,” he said during an interview at his colorful factory office strewn with new designs being tested for fit. “At this time our business concept is to make everything here. But I wouldn’t rule anything out.”

A native Canadian who attended Tufts University in Boston, Charney started selling T-shirts under the label American Apparel in 1987 with seed money cobbled together from his father, family friends, former classmates and parents of friends. Charney began his manufacturing operations in South Carolina before settling in downtown Los Angeles in 1997.

In recent years, Charney has battled multiple wrongful-termination and sexual harassment lawsuits brought by at least eight employees. The latest two suits, filed by five retail employees last spring, are now in arbitration, according to company lawyer Peter Schey. The company denies wrongdoing, but it acknowledged in response to a previous lawsuit that it operates “a sexually charged workplace” where employees deal with “sexual conduct, speech and images as part of their jobs.”

It was an unusual admission for a publicly traded company, but investors are more likely focused on the firm’s finances. American Apparel has suffered nine straight quarterly losses. The company booked sales of $547.3 million in 2011 but posted a net loss of $39.3 million. Shares closed Friday at 87 cents, down from their 52-week high of $1.13 last July 15.

“There’s been a lot of discussion about the importance of American companies employing American workers. But when it comes to fashion items, that doesn’t necessarily resonate with shoppers,” said Anthony Dukes, a business professor at the University of Southern California who has studied the retail industry. “There’s not a lot of evidence to suggest that ‘made in America’ is a great model.”

Marty Bailey, 52, is out to prove him wrong. The burly Kentucky native, who is the company’s chief manufacturing officer, has seen both sides of the problem. His 28-year career includes 15 years at underwear giant Fruit of the Loom, where he oversaw factories in Kentucky, North Carolina and Mississippi. When many of those factories closed, he supervised the company’s transition to manufacturing in lower-wage countries such as Honduras and Mexico.

Bailey joined American Apparel in 2002 and quickly set out to retool the retailer’s operations. His key innovation, borrowed from his years at Fruit of the Loom, was implementing a “team-based” manufacturing method that upped productivity and — he says — positions the company to successfully make it in America.

On an open factory floor with light streaming in from large windows, workers are divided into teams, with each responsible for sewing one style of clothing from start to finish.

A team, made up of 5 to 20 workers with their sewing machines pushed together, starts with fabric that has been cut on the fourth floor. The first person sews the sleeves. The next may attach a zipper. The items are passed among the team members, one after another.

At the end, there’s a finished shirt or skirt that is inspected by a quality control worker and then boxed up and sent down a conveyor belt to the distribution warehouse next door.

American Apparel’s skilled workforce can churn out 120,000 T-shirts in a day and quickly whip out new designs. Bailey said the fast turnaround from design to factory to store is a key advantage when jockeying for shoppers with competitors such as Forever 21 and H&M.

“I’ve had ideas on Monday and had them hanging in a storefront on Friday in Manhattan,” Bailey said.

The company’s products cost more than its fast-fashion rivals’ — a simple cotton T-shirt can sell for $21 if it comes from American Apparel and as little as $8 if from Target. Bailey said superior fabrics and better designs justify the higher price tag.

In the factory, motivation is key: Employees are paid for each completed garment, at a “piece rate.” Although everyone is guaranteed minimum wage — $8 an hour — factory workers typically earn $11 an hour, on average, and the fastest teams can earn $18. Supervisors clock their teams several times a week and devote time to training slow workers.

The company provides a welcoming workplace for its largely immigrant workforce. Banners such as “Legalize LA” hanging on its downtown factory building proclaim corporate support for immigration reform, and Charney has marched for workers’ rights. Supervisors are generally bilingual.

There is a medical clinic staffed with a doctor and nurses. Factory employees also get subsidized meals and free massages; masseurs in light blue American Apparel tops are sprinkled through the factory.

Besides paying higher wages, the company has faced other drawbacks of managing a U.S. workforce. Productivity slipped dramatically after the company was forced to dismiss 1,600 workers from its downtown factory after an immigration audit in 2009, Bailey said. The company had to hire and train thousands of new workers. It has tightened its hiring practices to ensure that all its employees are working legally.

Lopez, the team supervisor, jumped to American Apparel four years ago after toiling in other Los Angeles outfits, many with sweatshop conditions. She now earns $12 an hour.

“The pay is better here than at previous places I have worked,” said Lopez, 43. “If you are a fast sewer, you can earn a good salary.”

Oishang Mai, a 60-year-old who worked for decades as a mechanic at garment factories in Guangzhou, China, says conditions are better than busing tables at Chinese restaurants, the only job he could find after moving to the U.S. two years ago.

“I’ve been working at clothing factories for decades,” Mai said. “I’m glad to have a job doing something I’m trained in.”

In addition to the two large buildings downtown, the company owns four smaller manufacturing operations in Southern California. Fabric for the company’s trademark cotton T-shirts, which come in 52 colors, is knit and dyed in those facilities before getting trucked downtown for sewing.

Charney argues that the “made in America” model is not just a marketing gimmick but also a smart long-term strategy for retail.

American manufacturing will prove to be cost-effective as international transportation costs shoot up and overseas wages rise, Charney said, pointing to China as a prime example. “As that happens to the worldwide economy,” he said, “it’s going to make a lot of sense to manufacture in the United States or in Los Angeles.”

Even at night, the downtown L.A. factory’s huge parking lot is often jammed with cars. Light glows from its windows, and workers inside are still hunched over sewing machines.

Charney insists that the company is heading into an upswing, cautiously estimating that it may show a profit by next year. He rejects any suggestion that moving operations overseas may cure what ails American Apparel, but it’s an option that analysts say the company has to consider if its struggles continue.

No one knows whether those tricks will keep its factories open in Los Angeles. The company might go the way of San Francisco-based Levi’s, which closed its last U.S. factory in 2003, moving like much of the industry to find cheap labor in Asia and Latin America.

“American Apparel occupies an important niche in the job market in Los Angeles,” said Sung Won Sohn, an economics professor at Cal State Channel Islands and vice chairman of Forever 21. “Some immigrants qualify for high-paying jobs, and others qualify for only minimum-wage jobs. They provide employment to a lot of immigrants who don’t qualify for the high-paying jobs.