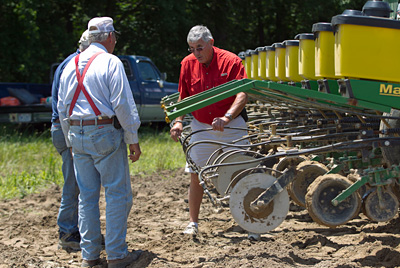 WASHINGTON — Southern peanut growers stand in the way of a massive new farm bill that seeks to cut billions of dollars from the federal subsidy system.

Farmers in North Carolina, Georgia and other Southern peanut-growing states charge they’ve been left out of a Senate proposal skewed in favor of Midwest corn and wheat growers.

(PHOTO: Peanut farmer Jerry L. Hamill (right) works with Sammy Hamill and Greg Walker to repair a minor problem with a planter on Wednesday June 6, 2012 on his farm near Halifax, North Carolina.)

The current system of direct cash payments to farmers would be abolished under the proposal and replaced by a variety of new crop insurance options, including a program for farmers with price or yield losses.

While much of the debate is expected to center on cuts to the national food stamps program, which accounts for 80 percent of the $100 billion in annual spending under the legislation, Southern farmers are more likely to hamper efforts to pass the bill before current legislation expires in September.

While farmers say they know subsidies will get cut, they want to keep parts of the current protections against loss, saying a Senate farm bill doesn’t take into account both the peanut pricing system and the long-term investments that peanut farmers make in their crop.

Jerry Hamill has been farming peanuts for 40 years in Enfield, N.C., about an hour east of Raleigh. He saves his best, most porous 360 acres of farmland for his prize-winning nuts, which are cracked open and eaten at ballparks across the country.

A stash of golden peanut trophies on top of the 68-year-old farmer’s cabinet underscores his skills. But he still worries about hurricanes and extreme weather that can destroy production. Two years ago, for example, he lost almost half his peanut crop because of a severe summer drought.

With the government facing massive deficits, the Senate Agriculture, Nutrition and Forestry Committee presented a bipartisan farm bill that would cut $24 billion in spending in the next 10 years.

The bill also seeks to consolidate duplicative programs and crack down on food assistance abuse. The committee chairwoman, Sen. Debbie Stabenow, D-Mich., says the bill closes loopholes and would put a stop to farmers getting paid for acres that are not planted and others who are no longer farming.

“This is not your father’s farm bill,” she said.

The White House supports passage of the bill, but emphasized that President Barack Obama wants more cuts from farm programs. The 2013 Obama budget calls for $32 billion in cuts to farm programs.

The key provision of the bill is a new insurance program known as Agriculture Risk Coverage, which compensates farmers for shallow, or small, losses in revenues measured over a five-year average.

Supporters say the program ensures coverage payouts are based on the market and not on numbers invented by government officials.

But peanut farmers say the program would lock in current low-market prices for peanuts in recent years and doesn’t take into account the high costs of specialty equipment.

“Our risk coverage is way below the cost of production,” said Robert Sutter, chief executive officer of the North Carolina Peanut Growers Association. “If you just decide, ‘Well, I’m not going to plant this year,’ the banker wants his payment.”

Unlike corn and wheat, which are traded on the stock market, making it easier to establish prices and insure, peanuts are not traded on an exchange and therefore are more vulnerable to price swings.

The University of Georgia’s National Center for Peanut Competitiveness applied the proposal’s measures to 22 peanut farms across the South and found that it wouldn’t provide the same protection as it would for corn and soybean farmers in the Midwest.

The peanut industry is pushing for modified counter-cyclical payments, another farm subsidy which is issued when crop prices drop below a certain level.

Peanut farmers say they would rather make their living off the marketplace, but Northampton County, N.C., grower David Grant said they know how quickly “high prices can go to heck in a handbasket.”

“American farmers are willing to do their part,” he said. “It’s just hard to know what is your part and what is you doing more than everyone else is doing.”