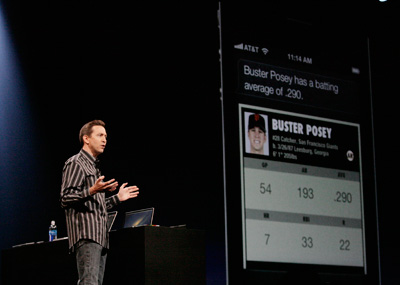 SAN FRANCISCO — Apple Inc. is mapping a course that it hopes will help it sail past smartphone rival Google.

Come fall, new Apple Inc. iPhones and iPads will have a slew of new features, including a souped-up mapping feature that will give spoken directions to drivers and let users simulate flying over lifelike three-dimensional versions of cities they’re navigating.

Apple executives showed off the new Maps app, along with a smarter version of Apple’s robotic assistant, Siri, and a line of new Mac laptops and software, during Monday’s opening keynote for the company’s developer conference here.

Although the iPhone is still the bestselling single smartphone in the U.S., most major phone manufacturers are producing devices using Google Inc.’s Android software. Taken together, Android devices made by Google-owned Motorola Mobility, HTC Corp., LG Corp. and Samsung are far outselling the iPhone. Keeping its devices larded with interesting new features may be Apple’s best bet to stay at the center of the conversation.

As with most Apple events in recent years, hype and anticipation had been whirling around the conference for weeks — and in the wake of the unveiling, the products that Apple didn’t announce garnered almost as much attention as the ones it did.

The company said nothing about an Apple television set, a product that Apple will not acknowledge but which is widely rumored to be in the works in the company’s secret development labs. Observers had speculated that Apple might invite software makers to start brainstorming applications for a future television product. That didn’t happen.

Nor did the company unveil a new iPhone or iPad tablet — its two hottest-selling devices. Most analysts believe the next iPhone will be announced around October.

Still, Apple spent nearly two hours on the many new features of its touch-screen mobile devices and line of Mac computers. Its current MacBook laptops — the Pro and Air lines — received a standard speed upgrade, with faster computer processors and graphics chips. The 15-inch MacBook Pro is available for $1,800, while the 13-inch Air starts at $1,200.

Apple also added a next-generation MacBook Pro to its lineup, a more expensive $2,200 model that is much lighter and thinner, and sports the high-definition “retina” screens that Apple developed for its iPhone and iPad.

The Macs will have a new operating system, called Mountain Lion, that will borrow many features from its younger cousin, iOS, the company’s iPhone and iPad software. Users will be able to send text messages and store emails, notes and documents in the cloud, so data does not exist only on the user’s local computer. The new software will be available in July for $20.

Apple will release the newest version of its mobile operating system, iOS 6, in the fall. Its new Maps application will replace Google Maps, among the iPhone’s most popular features since its debut in 2007 and a feature that allowed Google to own a valuable part of Apple’s bestselling phone.

All that means more potential for advertising dollars from companies that want to be prominent on digital maps.

The iPhone’s Maps app will offer turn-by-turn directions, in which the phone keeps track of the user’s current location and issues spoken directions about where to turn next. The app’s Fly Over feature enables the consumer to get an aerial view of a city’s skyline, looking down at photo-realistic 3-D renderings of buildings, rivers and parks.

Stocks of firms that manufacture stand-alone navigation devices dropped Monday, perhaps signaling investor concern that smartphones may further hasten the demise of navigation gadgets. Shares of Garmin Ltd. fell 8.6 percent, or $3.58, to $38.19, while TomTom slipped 2.7 percent in trading in Europe or 9 cents, to $3.27.

Analysts pointed to the Maps app, as well as an updated version of Siri, the robot assistant that can help plan schedules, find movies and locate sports scores, as a few of the new features that are keeping Apple ahead of the competition.

“If you look at any one feature you’re going to go, ‘That’s nice to have,” said Van Baker, an analyst at Gartner Inc. “But when you look at them in aggregate, it makes a big difference.”