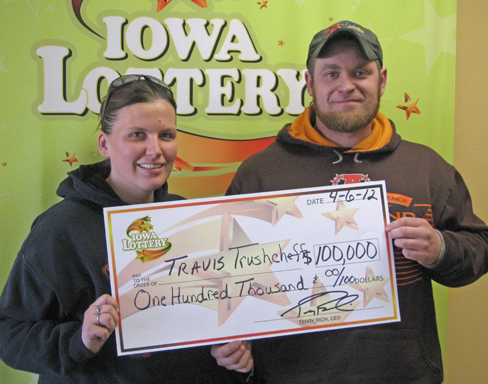 DES MOINES, Iowa – A Buffalo Center man said his gut feeling was right when he chose to play the lottery’s “Did I Win?” instant-scratch game and ended up winning a top prize of $100,000.

Travis Trushcheff, 25, said he just uses his intuition when choosing which scratch games to play, and this time it paid off.

Trushcheff said he was traveling with his fiancée, Stacey Miller, when they stopped at Cenex Ampride, 1301 Tenth Ave. N. in Humboldt and picked up the ticket.

“She called most of our family,” Trushcheff said. “I had to send a picture of the ticket over to them because they couldn’t believe it, really.”

Trushcheff claimed his prize April 6 at the Iowa Lottery’s regional office in Mason City. He said he only took an hour off of work as a mechanic/truck driver to claim the prize.

“I’m kind of a workaholic,” Trushcheff said with a laugh. “They were wondering why I even came in this morning.”

Trushcheff said he and Stacey plan to use some of the winnings to put toward their upcoming wedding, as well as pay off a house they just purchased.