‘Alcatraz’ hopes to lock up a new season 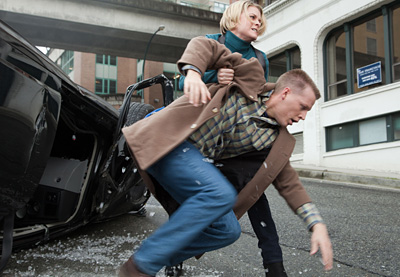 SAN FRANCISCO — On a stunningly gorgeous Thursday in San Francisco, its hills are alive with the sounds of squealing tires.

This is what happens when a film crew from the Fox sci-fi mystery, “Alcatraz” comes to town to pay homage to the most iconic car chase in cinema history. Yes, they’re doing their best to replicate certain pieces of the 1968 Steve McQueen classic, “Bullitt,” which famously turned the streets of San Francisco into its own slalom course and transformed big-screen car chases into an art form.

Safely tucked into a resident’s garage entryway on the dramatically steep incline of Taylor Street, I watch in slack-jawed awe as a sparkly blue 2013 Ford Mustang, driven by stunt woman Shauna Duggins, races after a bad guy in a black Dodge Charger. Both vehicles reach speeds of up to 65 mph and briefly take flight after bursting though an intersection. They land with violent force before tearing around a corner in rubber-burning splendor.

The chase scene will be part of Monday’s big, two-hour season finale of “Alcatraz,” which finds police detective Rebecca Madsen (Sarah Jones) in hot pursuit of Tommy Madsen (David Hoflin), her mysterious grandfather and former inmate at the island prison. Whether we see any more of the J.J. Abrams drama beyond that is yet to be determined. The show opened with solid ratings in January, but its numbers have gradually fallen off, and “Alcatraz” finds itself in danger of cancellation.

“I don’t think anybody (with the production) is overconfident that we’re coming back. We’re not a sure thing,” Bender said during a break in filming. “I know Fox really loves our show, but there are a lot of factors to weigh. I think some of it will be tied to how much they believe in the potential of the show.”

To that end, Bender, who also is an executive producer on the series, thinks the “Alcatraz” team is just “starting to scratch the surface” of what the show can be.

“It’s a very unique concept and it’s not easy to get it right,” he said. “You don’t want to be just the criminal-of-the-week series, and yet, you don’t want to be the serialized mystery where no one figures anything out. In a sense, we’ve had to do two shows: One, a catch-the-bad-guy procedural set in the present, and the other a really strange, Edgar Allan Poe-ish Alcatraz world of the past. … We’re just beginning to find out how deep the show can go. I hope we get the opportunity to keep digging.”

The renewal uncertainty notwithstanding, “Alcatraz” producers have to plan as if the show will go on. During their session at WonderCon in Southern California last weekend, they informed fans that the finale will answer plenty of Season 1’s burning questions, but pose big new questions, as well. And yes, it will end on a cliffhanger.

“The last episode is all about Tommy Madsen,” co-showrunner Daniel Pyne said at WonderCon. “We focus on the guy we started with so you feel closure to the story. But we’re going to open the warden’s door and find out what’s in that secret room, and it’s going to open up a hundred more questions.”

As for that climactic car chase, well, it won’t be an exact duplication of the “Bullitt” version, which consumed nearly 10 minutes of screen time and took almost three weeks to shoot. The “Alcatraz” crew, which usually shoots in Vancouver, was in the Bay Area for only three days.

“We’re trying to pay homage to it without literally replicating it. There’s no reason to,” Bender said. “It’s OK if viewers get that we’re tipping our hat to the movie. But it has to be part of the story.”

If “Alcatraz” does earn a second season, Bender hopes to spend more time shooting around San Francisco. Due to logistical and financial considerations, the recent car-chase shoot was only the second time the show had been in the Bay Area since the pilot episode.

“There’s no question that we lose something by not being here,” he said. “It would be fabulous to have our characters playing scenes with a decaying Alcatraz around them, and/or out in the streets. San Francisco is obviously one of the most visual cities in America.”