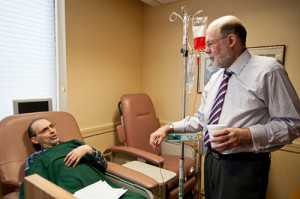 His doctors expected his Stage 4 cancer to kill him long ago. He’s survived because of a chemotherapy drug that has attacked the tumors in his body, shrinking most and even eliminating some.

But now, that drug is no longer being made.

He has been scrambling to find Doxil, the medication that has been his lifeline the last five years. He spends hours every day on the phone and on his computer searching for a dose and has traveled hundreds of miles for an infusion. He has found himself in a world where people are willing to put a price on his survival, like the pharmacist who offered to sell him a dose from a secret stockpile for $14,000 in cash.

“Withholding this drug from me is giving me a death sentence,” said Schiavello, 58, who suffers from muscle cancer.

His quest to find Doxil is just one example of how a national prescription drug shortage that has been building for over a year is jeopardizing lives.

A record 267 drugs were in short supply or completely unavailable in 2011, affecting 550,000 patients nationwide. The shortage includes antibiotics, anesthetics, drugs for cancer treatment and heart conditions, along with intravenous nutrition therapy. Even Valium has been scarce. The problem is continuing despite attempts by the federal government to speed up production of crucial drugs.

“It’s a big problem for us — many of these drugs are the backbone of treatment for malignancies,” said Dr. Thomas Rakowski, an oncologist at The Valley Hospital in Ridgewood. “Patients are being jeopardized as if this is a Third World country.”

This is the story about how the drug shortage has turned a Saddle River father into a scavenger. For Schiavello, finding his next dose is a full-time job.

Schiavello’s health problems began when he found a lump in his leg in 2001. His doctor wasn’t concerned. When it continued to grow, he had the tumor removed two years later. Again, he was told it was nothing to worry about.

By January 2006, errant cells from the tumor had metastasized to his lungs. He was diagnosed with Stage 4 leiomyosarcoma, a smooth-muscle cancer. His lungs were riddled with tumors.

His prognosis was chilling.

In 2007, he started Doxil, a chemotherapy drug from Johnson & Johnson that is more commonly given to patients with ovarian cancer, leukemia or AIDS-related Kaposi’s sarcoma. The drug’s formulation allows it to remain in the body longer to fight cancer cells, but it doesn’t trigger the typical side effects associated with chemotherapy drugs, like hair loss and nausea.

The change in Schiavello was remarkable: Doxil shrunk the tumors in his lungs 90 percent — both in size and number.

He’s already lived a year longer than the specialists expected.

He needs a dose every six weeks. For as long as he hopes to live. “It’s like insulin to a diabetic,” Schiavello said.

But on Aug. 30, his oncologist called him to say the infusion he was scheduled to receive two days later wasn’t available.

The only factory that made the drug, Ben Venue Laboratories, had been experiencing a series of production problems for months and had received numerous citations by the Food and Drug Administration for quality and sterility issues. The Ohio factory, which had been supplying the drug to J&J, would soon shut down.

Doxil is a drug that is complicated to make but brings in little in the way of profit, like many of the drugs that are in short supply. That means there is little incentive for factories to renovate to prevent manufacturing problems or for others to jump in and take over production if a factory falters.

“If a drug was making lots more money, the company would invest more,” said Dr. Ezekiel Emanuel, chairman of the medical ethics department at the University of Pennsylvania. “If you’re not making a lot of profit, are you going to throw everything you have to get the line back up? The incentive isn’t there.”

J&J told doctors not to start any new patients on Doxil. It started a waiting list for the drug, Doxil CARES.

The waiting list required physicians to submit a patient’s medical history and health status. But J&J refused to tell patients where they were on the list — and if or when they would receive another dose. The company is deciding who gets the medication and sends it to medical centers or physicians earmarked for specific patients. J&J has requested that all unused medication be returned, said Lisa Vaga, a spokeswoman for the company, which is headquartered in New Brunswick.

Schiavello’s oncologist put him on the waiting list, but Schiavello said he could get no answers from J&J about when he could get the drug.

Schiavello scrambled for other options.

He discovered what has become known as the “gray market” — hospitals, medical offices and infusion centers that are licensed to dispense the drug but aren’t following J&J’s new distribution rules.

He had contacts in the field as a Columbia University alumni and a biomedical engineer who founded Minerva Health Technologies Inc., a local firm that develops healthcare software products. His contacts helped put him in touch with top oncologists and medical centers across the country that have supplies of Doxil. Schiavello is the first to acknowledge that another patient without his background would probably be dead by now.

His search led him to Dr. Howard Bruckner, from Bruckner Oncology at the Eastchester Center for Cancer care in the Bronx. He gave him one precious dose.

“He’s had an exceptionally long remission. As an oncologist, I felt it was appropriate to maintain that,” Bruckner said.

“I never saw the request to send it (his supply of Doxil) back to J&J, but even if I did, I would have ignored it,” Bruckner said. “I had such a small amount that it wouldn’t have made a huge difference to a number of patients, but it will make a difference to one patient like Dan.”

Every time he receives his life-saving medication, his search begins again for the next dose.

He’s found that some people are trying to profit from their leftover Doxil. A pharmacist at a large medical center offered to sell Schiavello a dose for $14,000 cash, thousands more than the medication is worth. Schiavello turned him down.

“Even if I could afford to pay that every month, there’s no way of knowing what kind of shape the drug is in. What if it’s been sitting in that pharmacist’s car trunk — it needs to be kept refrigerated,” Schiavello said. “And who’s to say what’s really in that vial? You have no idea who you’re dealing with when you go through channels like that.”

So far, all Schiavello’s doses have been paid by his insurance company, even those he’s obtained outside his own doctor’s care.

“The doctors and sites giving me the infusion aren’t making money on this,” Schiavello said. “It’s all perfectly legal — it’s just not what Johnson & Johnson wants.”

Initially, 4,400 patients enrolled in Doxil CARES. By the end of January, the list had decreased to 500, Vaga said. The company recently found a factory willing to make the drug, though production has not begun.

“We’re doing everything we can to get Doxil to patients and expect to have it available by the end of the year,” Vaga said.

Meanwhile, public pressure has mounted on the FDA to do something about the crisis. Recently, the agency announced that an alternative drug, Lipodox, can be temporarily imported from an Indian company, Sun Pharma Global.

But it is not an FDA-approved medication and, in fact, the FDA refuses to say whether it is bio-equivalent to Doxil. The agency has no plans to test the drug, and it will not be covered by Medicare or most private insurers.

“I’m only going to use Lipodox as a last resort because I just don’t know what it will do,” Schiavello said.

Another potential alternative drug has problems of a different kind. Michael Dwyer, a former New Jersey resident with a small pharmaceutical company in San Antonio, has been working on a generic form of Doxil. Azaya Therapeutics should be ready to start clinical trials in a couple of months, Dwyer said.

But a major hurdle stands in the way: Doxil must be used in studies to compare the new drug’s efficiency, and J&J said it has no Doxil available for such studies.

“I wouldn’t want to take Doxil away from patients who need it so I can do research,” Dwyer said. “But we are working with the FDA to get our product out there. It’s a very unique situation to not have the brand-name drug to test a generic.”

If its drug is approved, Azaya could get about 375 doses to market in 30 days, he said. His 11-employee company could continue that pace but would need eight to 12 months to produce larger amounts, Dwyer said.

The dire shortage of life-saving drugs has raised ethical issues about whether companies that are the sole supplier of a critical drug can just cease production.

“It’s unfair to patients,” she said. “We want to give optimal care and that means using optimal drugs.”

The Schiavello family is incredulous that the shortage may cost the husband and father of two his life.

“People diagnosed with these serious illnesses shouldn’t have to also fight just to get the drugs they need,” Schiavello said. “This is so scary, and I’m so angry about this whole thing — not just for me but for all the other patients out there.”