Hoffman had originally pled not guilty, but plea change hearing was scheduled days before a December 15th trial date was set to start. Hoffman could have been sentenced up to two years in prison for failure to comply with the sex offender registry.

Mark Hoffman is listed as a tier 3 sex offender on the Iowa State Sex Offender Registry stemming from an incident that started in a bar parking lot of Mason City in August 1995. Kenneth Sharp and Mark Hoffman both where arrested that August for 1st degree kidnapping and raping an adult female at knife point. Before Hoffman’s trial he entered a voluntary negotiated guilty plea, instead pleading guilty to a lesser crime of aiding and abetting sexual abuse 3rd degree, receiving up to a 10 year prison sentence.

Kenneth Sharp went to trial and was found guilty of the original charge of 1st degree kidnapping, a class A felony. Sharp received a sentence of life in prison for that conviction. In 2008 Kenneth Sharp tried appealing his conviction and the Iowa State Court of Appeals affirmed that conviction, he remains in prison serving a life sentence.

Following a separate investigation in November 2005 Mark Hoffman’s was charged with aggravated domestic assault resulting in injury and 3rd degree kidnapping. The charges stemmed from an incident in which he was alleged to of held a woman in her apartment over a weekend until she escaped and called law enforcement. He was found guilty this time with lessor crimes of 2nd offense domestic assault and false imprisonment. Mark Hoffman received 3 years in prison on these convictions. 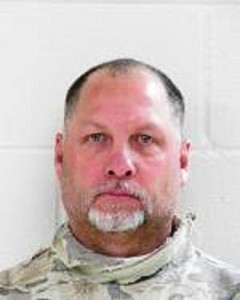