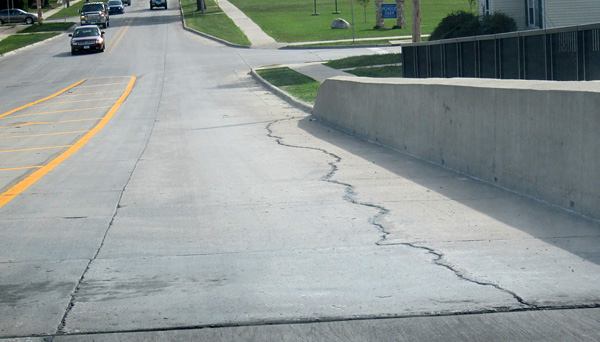 MASON CITY – A repair project on the 12th Street NW overpass has wrapped up but City Councilman Travis Hickey isn’t satisfied with the results.

“I’ve had numerous comments and calls on this” from citizens, Hickey said.

“We were supposed to fix all the structural integrity” on the bridge, Hickey noted at Tuesday’s council meeting.  “But there is still some significant cracks, when you drive up and down the bridge.”

The cost of the project was $74,382.55 according to a city hall memo, and the scope of the project involved “the replacement of bridge approach pavement panels at both ends of the bridge” as well as “coping” related to the mechanical stabilized earth walls and joint replacements and “routing and sealing of street pavement.”

Hickey said Wednesday that the work didn’t amount to much more than a “band-aid” and he worried that the City would need to be back out there performing more repairs soon.

The council voted 4-1 to approve final payment for the project to Yaggy Colby; Hickey voted no, and Council member Jean Marinos was absent.

A press release from the City in early July indicated that “this project will include the partial replacement of the bridge approach pavement.”

A drive up and down the bridge Thursday morning showed significant cracks on both the east and west ends of the bridge (see photos).

The City Council had an opportunity earlier this spring when the project was being discussed to hold those responsible for building the bridge in the first place, Henkel Construction (general contractor) and WHKS Engineers and ask them to share in the cost of fixing the problem.

Instead, council members Scott Tornquist and Jean Marinos balked at the idea.

According to meeting minutes from an April 12th council work session,  discussing the quandary the City faced with the bridge, Tornquist stated, with Marinos agreeing, “the problems were disappointing, but the City would spend a lot more money trying to assess blame.”

Hickey agreed on Thursday night that simply going to WHKS and Henkel this past spring and asking them to fix the problem might have been a good idea.  “I don’t disagree with that,” he said.