Mayor Eric Bookmeyer gave his state of the city address. Eric puffed out his chest and did his best Seargant Carter impersonation. Unfortunately, in his speech, Sergeant Bookmeyer looked back as much as he looked forward and took some thinly veiled cheap shots at former council members. He blamed circumstances or people who stand in his way, or that he perceives stand in his way. Is that leadership? As he laid blame, he claimed that Mason City is experiencing growth, new business, and a “river city renaissance.” He proclaimed how low the taxes are in Mason City as a great achievement. Did he forget that the former council just left office 2 weeks ago? Didn’t they lay the groundwork for all this prosperity he claims is now here? Didn’t they lay the policies and approve the budgets that brought us the low taxes? It was evident that Marsters, Nelson and Weaver really got to this guy and he blew a great chance to look to the future, forget the past and lead. His verbal sparring with Sandy Servantez after her remarks during the public forum was amateur and cheapened his presence further. In honor of the “Three D’s” you talked about in your original state of the city address, Eric, I award you one. GRADE: D

Jean Marinos was faced with two dilemmas at last night’s council meeting. The first dilemma was a vote on a possible real estate deal located near Menard’s. Her husband, Jim, had earlier addressed the council and stated that rental vacancy rates in Mason City were high; 12% or more at times. He wasn’t supportive of Mason City pursuing the deal. Marinos recused herself from the vote on this matter, showing class and realizing that she was just too closely involved personally to make an objective vote. That was a breath of fresh air. The next dilemma she faced was sitting up there listening to Scott Tornquist reach too far into the cookie jar as he put the real estate developer on the spot, forcing him to accept higher bids from Iowa contractors who would bid the housing development work. (More on that later.) Marinos offered a compromise on the deal that the developer could live with and the council accepted it. GRADE: A

Travis Hickey didn’t wear his “rookie” t-shirt last night, and he offered some decent observations. He talked about “changing the culture” and “TIF.” I think he knows what TIF is, but I’m not sure. It seems he really thinks the city’s partnership with the Pappajohn Center would spur small business development in Mason City, which shows how clueless he is when it comes to starting and running a small business. He fell in line with Bookmeyer and Trout and played by their rules; he was a good team player and voted for their agenda, but showed once again that he can’t think for himself. GRADE: C-

John Lee came prepared for the meeting and it was evident early that he did his homework. He proposed a safeguard in the city’s deal with NIACC’s Pappajohn Center to make sure the tax dollars the city gives them are used properly and only for the project in question. That shows he is interested in being a good steward of the citizens and will not frivolously toss cash around. He is aware that the city’s cash flow could be seriously affected by Governor Branstad’s proposed commercial real estate tax cuts and seems to realize that budgets will be tighter than ever in coming years, and that all dollars count. Lee did have a little trouble with his blue chair and nearly toppled over at one point though, which will cost him some style points. GRADE: A-

Janet Solberg once again sunk to new depths at the council table. She showed her total lack of brainpower when she asked the real estate developer, who wants to spend millions of dollars in Mason City, if he had thought about the “noise from Woodharbor and Menard’s” when he considered Mason City for his project. Umm, right Janet, let’s give this guy second thoughts. You will owe Sergeant Bookmeyer at least 50 push ups for that transgression. This from a person who has skipped almost every meeting covering a possible trash plant that wants to divert 250 tons of refuse into her own ward. Are you really this lost? Janet, feel free to write a retort for the Globe to publish once your are finished removing your foot from your mouth. On the Pappajohn deal with the city, your line “Bring it on!” was corny and shows you have no concept of the fact that this program won’t get used and won’t amount to much more than a check from we the taxpayers to NIACC for ten grand to make business cards and update a website and keep well-paid people employed. The lowest grade I can hand out is “F” but I am seriously looking for a new scale that can somehow quantify your failure. GRADE: F

Alex Kuhn seemed a little nervous in his first real council meeting with anything of substance on the agenda, but he tried hard and seemed to know some facts. Kuhn makes a good “private” to go with Sergeant Bookmeyer, falling neatly in line and taking his marching orders in stride. He offered no resistance nor new ideas on the Pappajohn deal, likely due to the fact that Bookmeyer wants no debate or bickering at the council table. Kuhn’s massive disappointment was his actual vote on the deal. A seasoned politician would have recused himself from that vote if he were in Kuhn’s fine leather slip-on shoes. Kuhn, who mentioned “the campaign” more than once last night, seems to have slept through ethics class the day they talked about “conflicts of interest.” See, Alex’s mom sits on the NIACC Foundation Board of Directors, and he just voted to give NIACC thousands of dollars. A clear conflict, as much or more than Jean Marinos’ conflict with the real estate deal, but she was savvy enough to know that and gracefully bow out on that one. I think Alex means well and just wanted to do as his sergeant instructed. GRADE: C 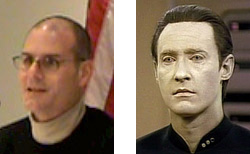 Scott Tornquist can barely contain himself these days, he is in such a hurry to implement Bookmeyer’s blueprint. At last week’s North Iowa Landfill Board meeting, where they talked about the trash plant, the newly-appointed Tornquist didn’t even introduce himself to the board but instead instantly launched into one of his robot-like diatribes that lose everyone within 15 seconds. When just a few questions were raised about the deal, he sat back in his chair and seethed, gathered himself, and with internet speed proceeded to alienate the room. Well, he was out of touch again last night. First, and most surprisingly, he flew in the face of Bookmeyer’s agenda when he put the senior housing real estate developer in the awkward position of agreeing on public television to consider higher bids from Iowa contractors. That discussion could have gone on indefinitely had Jean Marinos not stepped in and deftly made a compromise offer. How many developers now want to come to Mason City and face the scrutiny of Mason City’s version of Data from Star Trek? Talk about bad publicity. On the other hand, at least the public wasn’t shut out completely. Tornquist further demonstrated that he is completely out of touch later when he voted in favor of the city’s partnership with the Pappajohn Center. He, like Kuhn, should have recused himself from that vote due to the fact that his wife is an administrative assistant at the Pappajohn Center. That, fellow citizens, put Scott way, way too close personally and is a clear conflict of interest. Her job could depend on the securing of funds that actually provide work for the Pappajohn Center to do. No revenue usually means layoffs at most companies and even schools. I will give Scott some credit for looking out for Iowa contractors and for doing his homework, but his inability to see past his own ego and recuse himself cost him dearly. GRADE: D-

Watch some video highlights from the city council meeting: