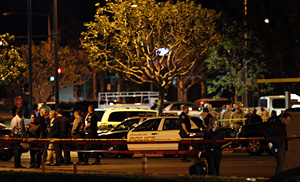 SANTA ANA, Calif. — A 23-year-old former marine who some say was distraught following combat service in Iraq has been named a suspect in the serial killings of four homeless men in Orange County.

Itzcoatl Ocampo, of Yorba Linda, was chased bystanders Friday following the most recent stabbing death in the parking lot of an Anaheim fast food restaurant. On Saturday, Ocampo remained in police custody without bail and is expected in court on Tuesday.

“We are extremely confident that we have the man who is responsible for the murders of all four homeless men in Orange County,” Anaheim Police Chief John Welter said at a news conference Saturday. Police said they will seek four counts of murder next week.

Authorities did not specify a motive for the killings, which began on Dec. 20 and sent fear through the homeless community. However, a relative and a friend of the suspect described a young man who appeared to be deeply troubled following his return from service in Iraq in the summer of 2010.

“When he came back from Iraq he was sick,” said his uncle, Ifrain Gonzalez.

For the last year, he had been telling relatives that he was seeing and hearing things, Gonzalez said.

The last time Gonzalez saw his nephew was at a Dec. 24 Christmas Eve party. Ocampo, he said, had told a cousin: “I did something terrible, but don’t worry.”

It was four days after the killings had begun.

Brian Doyle, a friend from high school, said that Ocampo told him he had been kicked out of the military. A Marine Corps representative could not be reached Saturday for confirmation, and Anaheim police declined to discuss Ocampo’s military service.

Since Ocampo’s return, he hung out with Doyle from time to time, drinking beer, smoking cigars and talking.

He was arrested Friday evening after bystanders chased him down about a quarter mile from the shopping center where police found the body of John Berry, 64, near a trash bin behind a Carl’s Jr. restaurant.

On Saturday, a makeshift memorial of balloons, flowers and oatmeal cookies stood at the site of the homeless man’s death. Mourners described the victim as a familiar and friendly presence outside the restaurant.

Berry wore a long white beard and often ended a conversation with a blessing. Friends said he was an astronomy buff and carried a well-thumbed Audubon guide, as well as a Bible. Berry enjoyed identifying the fowl visiting nearby waterways, said friend Bill Emery. “One day he pointed out a duck and said “That’s a cinnamon teal.”

Berry was less forthcoming about his own family. He told some people that they lived in Costa Rica and others that he was from the East and that his father was a physician.

With a serial killer targeting homeless men, friends and acquaintances said they worried for Berry’s safety.

At first, Berry professed that he wasn’t scared. He was interviewed earlier this month by a Los Angeles Times reporter at the riverbed camp where he had been living for months under a tarp and said he was safer there than in a shelter.

“I just like to stay outdoors,” Berry said. “A guy can get killed crossing the street. I’ve been as careful as I can, watching and everything.”

Police had warned him to leave, but he refused.

In his final days, however, Berry grew more afraid.

Marilyn Holland, 51, who lives in a mobile home park near the shopping center, said she saw Berry on Thursday and he told her he thought somebody was stalking him from the trees along the riverbed.

She said she planned to buy him a prepaid cell phone but never got the chance.

Holland and others said he would be missed. “He knew everybody around here by their first name,” she said.

Linda Maher, who also lives in a mobile home park, said she talked to Berry Friday and told him to be careful.

“God bless you,” he replied.

A task force of local police departments, the Orange County Sheriff’s Department and the FBI had been investigating the stabbing deaths for nearly a month, and determined quickly that they were looking at the work of a serial killer. The other victims included James Patrick McGillivray, 53, who was killed near a shopping center in Placentia on Dec. 20; Lloyd Middaugh, 42, whose body was found in Anaheim on Dec. 28; and Paulus Smit, 57, who was slain in Yorba Linda on Dec. 30.

The suspect in the killings was born in Mexico and moved to California with his family when he was 1, according to Gonzalez, his uncle. Lanky with close-cropped hair, he wore a jacket and tie in his 2006 graduation photograph in the Esperanza High School yearbook. Below his portrait is the quote, “Walk the streets I walked alone, then sit and judge me.”

At the time, according to his uncle and his friend, Ocampo had one goal: Getting away from home. His parents, who worked in factories, were splitting up, and their house in Yorba Linda was being foreclosed on.

It did not go well. “I feel alone in the middle of the desert,” his uncle remembered Ocampo telling him in a phone call from Iraq.

When he returned to the U.S., Ocampo moved into a rented bedroom that he shared with his mother and a younger sister and brother in Yorba Linda. His main activity was playing video games, Gonzalez said. Things got worse when he learned a good friend had been killed in Afghanistan.

Gonzalez said appointments to get his nephew psychological help had been made and canceled several times.

In high school, Ocampo had been reserved and “a little goofy,” Doyle said. But when he returned home from military service, he seemed like a different person.

“You could just tell something was stressed about him,” Doyle said. “I just wanted to be a friend to him.”