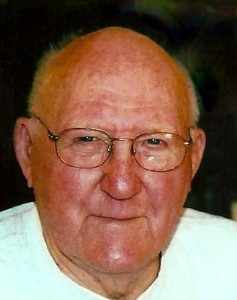 Funeral services will be held at 10:30 Tuesday, January 3, 2012 at First Congregational Church, Charles City. Officiating will be Dr. Forrest Cornelius. Visitation will be from 4:00 until 7:00 pm, Monday at Fullerton Hage Funeral Home, 401 Blunt, Charles City. Interment will be in Sunnyside Memory Gardens, Charles City.

Milton was born on March 24, 1919 the son of Charles and Elda (Polzin) Obermeier.  He graduated from Charles City High School in 1938 and attended Upper Iowa University where he played football until he entered the service in early 1942. During WWII he served as a gunnery instructor of the Army Air Force until his discharge in 1945.  He married Orpha Zidlicky on Febuary 4, 1944 in Lime Springs, IA.  Following his time in the service he worked at Oliver White as a Supervisor until retiring in 1981 after 35 years of service.  He was active in his community, a member of the First Congregational Church, Oliver Athletic Board, and past-president of the Cedar Valley Ducks Unlimited Chapter.

Milton’s passion for faith, family, friends and the great outdoors was evident throughout his 92 years. He was an avid fisherman, hunter, loved sports, playing cards and bowling which is what he was doing the day before his admission to the Hospital.  He will always be remembered for his keen sense of humor to the end of life.

Condolences may be shared with the family at www.Fullertonfh.com.  In lieu of Flowers memorial gifts can be given to the First Congregational Church, Charles City Iowa.

Fredrick Gerald “Jerry” Fisher was born on February 11, 1936 in St Ansgar to Clyde B. and Hazel (Bullen) Fisher.  He graduated from Charles City High School in 1954. After high school Jerry enlisted in the United States Marine Corp where he served for two years.  He was employed by White Farm in Charles City for 37 years before retiring. Jerry loved sports and especially playing fast pitch softball playing 2nd base for the Salsbury Laboratory team.  He was a big fan of the Minnesota Twins and Vikings. He loved spending time with his nieces, nephews and cousins.

Jerry was preceded in death by his parents and 3 siblings.