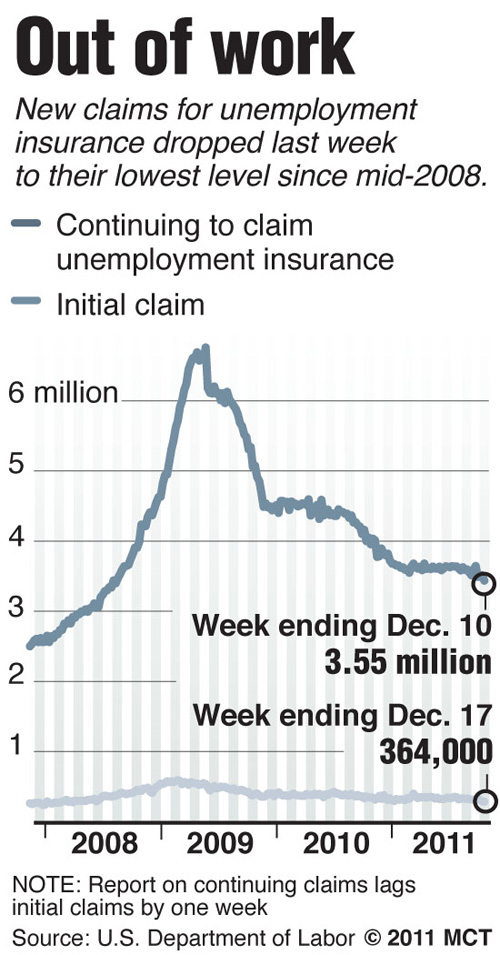 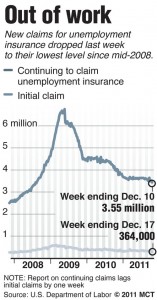 WASHINGTON _ Just a few months ago, the economy seemed to be skidding toward another recession. Now, a continued drop in jobless claims, a rise in consumer confidence and other signs of a growing recovery are cheering economists as the year draws to a close.

“The economy has clearly re-accelerated at year’s end,” said Mark Zandi, chief economist at Moody’s Analytics. “It kind of stalled out midyear through the debt ceiling debacle and right up until September.

“But in the last three months, it’s really started to pick up, and that’s encouraging.”
Still, economists project growth to slow again somewhat early next year as the European debt crisis starts taking its toll and some temporary boosts, such as manufacturers replenishing inventory, wear off.

Economists also warned that growth could take a further hit if officials in Washington fails to extend the payroll tax cut and long-term unemployment benefits.

Both were extended for two months by the Senate last week, but for several days Republicans in the House balked at doing the same.

On Thursday, House Republican leaders agreed to support the temporary extension and hoped to pass it before Christmas.

Consumer confidence plummeted during the summer, while officials in Washington fought bitterly over raising the debt ceiling and Standard & Poor’s downgraded the U.S. credit rating for the first time.

The midyear economic stall was deeper than originally thought, the government said Thursday.

The Commerce Department revised its estimate of annualized growth to a sluggish 1.8 percent from July through September, below expectations and down significantly from an earlier estimate of 2.5 percent.

But economists said the data simply confirmed that the summer was not kind to the economy and highlighted how much things have improved since.

Growth has picked up steam through the fall as dropping gas prices put more money in consumers’ pockets and businesses rebuilt their inventories. Economists project the annualized growth rate from October through the end of the year could be as high as 4 percent.

Helping fuel that recovery is continued improvement in the job market.

New jobless claims declined again last week, falling to 364,000, the lowest level since April 2008, the Labor Department said Thursday. The four-week average of 380,250 is below the 400,000 figure that economists say is key to cutting into the unemployment rate.
In addition, a leading gauge of consumer confidence rose in December, the fourth consecutive monthly increase since it bottomed out in August.

Consumers were much more positive about the overall economic prospects this month than in November, according to the Thomson Reuters/University of Michigan Surveys of Consumers released Thursday. The percentage of respondents expecting good economic times ahead increased to 29 percent from 19 percent in November, though the figure was still historically low.

The data “just added to the evidence that the economy is slowly gathering momentum,” said Gary Schlossberg, senior economist at Wells Capital Management in San Francisco. He downplayed the revision in third-quarter economic growth as “rearview” data.

He is estimating fourth-quarter growth at 3.5 percent to 4 percent. Zandi’s estimate is 3.7 percent.

“On balance, it’s encouraging,” Schlossberg said of Thursday’s figures. “It’s consistent with the tone of the other data showing the economy for the third straight year finishing the year with momentum.”