This news story was published on January 20, 2013.
Advertise on NIT • Subscribe to NIT 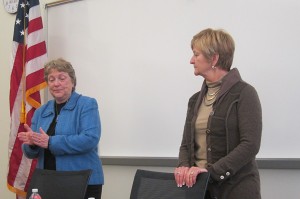 Senator Amanda Ragan and Representative Sharon Steckman explain how they work with the Chamber of Commerce.

The roughly $2 million dollar North Iowa Commerce Center opened last March.  It is located at 9 North Federal Avenue.  The property is owned by the Mason City Chamber of Commerce.

Marquardt asked Rep. Steckman and Sen. Ragan to describe how they are working with the Chamber of Commerce. 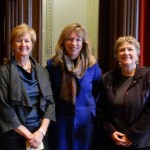 Sharon Steckman (left) and Amanda Ragan (right) met with The Chamber of Commerce’s Robin Anderson at the Iowa Capitol this week.

“We meet with lots of people who do not agree with us,” Sen. Ragan explained.  NorthIowaToday.com published on Friday a photo of Steckman, Ragan and Mason City Chamber Director Robin Anderson standing together at the Iowa State Capitol.  Sen. Ragan and Rep. Steckman claimed that the photo was taken due to an “issue with a bad picture” that went out in a former Chamber of Commerce newsletter.

“Well, I don’t know what their agenda is,” she said.

It is widely known and reported that the Chamber of Commerce is a lobbying organization that is against raising minimum wages, is against the rights of workers, is in favor of de-regulating Wall Street, is anti-environment and is pro big business.  The Chamber is funded by, among other means, dues paid by its members. 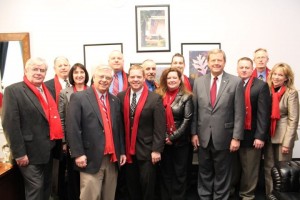 Last March, North Iowa leaders, under the banner of the Chamber of Commerce, went to Washington D.C. They wore red Chamber scarves into the offices of our elected leaders to show a united front for the policies the Chamber wants to advance.

Marquardt’s contention was that by funding the Commerce Center and giving the Chamber $1.5 million, Steckman and Ragan directly aided an organization that is diametrically opposed to the very ideas and issues for which they fight for in the Iowa Legislature as Democrats.

Marquardt further pointed out to the two legislators that in addition to lobbying for public funds, much of the Chamber’s energies are spent in recruiting new members, who will pay dues, which are then funneled to Washington into the coffers of the U.S. Chamber of Commerce to be used in lobbying efforts against the Democratic Party agenda.

“That is not the way it should be,” Representative Sharon Steckman responded.

“It is a regional commerce center,” Senator Amanda Ragan informed.  “That’s what the intent was.  It was not supposed to be specifically for the Chamber.”

Sen. Ragan and Rep. Steckman declared that they would look into the accessibility to the Commerce Center for those who are not Chamber of Commerce members.

“I will definitely check into that,” Rep. Steckman said.

When asked if she was mislead by the Chamber of Commerce, Sen. Ragan replied “I don’t know if I was mislead… I’m going to check it out and see what’s going to happen.”

Watch video of Amanda Ragan and Sharon Steckman explain why they secured $1.5 million for the Chamber of Commerce and their relationship with the organization: