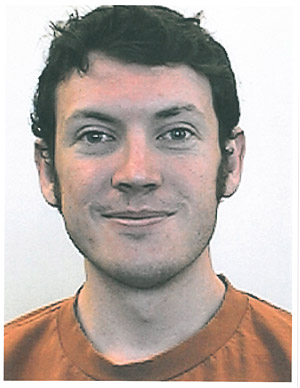 UPDATE: One University of Iowa neurology professor sternly warned against graduate school admission last year to the man now accused of killing 12 people and wounding 58 others during the opening night of “The Dark Knight Rises” at an Aurora, Colorado movie theater.

“Do NOT offer admission under any circumstances,” UI Professor Daniel Tranel wrote in an e-mail dated Jan. 30, 2011, regarding James Holmes’ application as a neuroscience graduate student. UI psychology Professor Mark Blumberg agreed with Tranel in an e-mail response.

Neither professor gives reasons for denying Holmes’ application in the documents, which were released by the UI Thursday in response to requests from the media.

Blumberg, in an e-mail to The Gazette Thursday, said he was out of the country and that he had “nothing to say about this case.”

Holmes was one of seven applicants to the UI neuroscience graduate program interviewed in January 2011, according to the UI documents. Of the seven, Holmes was the only one Tranel said should not be offered admission. The names of the other students were redacted in the UI documents, but the others earned comments such as “stellar,” “solid, should offer admission,” and “probably fine; smart and well spoken.”

The UI released 12 pages of documents Thursday related to Holmes’ 2010 application to graduate school, including his resume, reference recommendations and his admission essay. Holmes was ultimately denied UI admission in early 2011.

UI Spokesman Tom Moore on Thursday would say only that “the committee did not feel that Mr. Holmes would be a good personal fit for our program.”

Holmes was interviewed in person on the UI campus by the committee, Moore said.

The application details impressive educational attainment, including a 3.9 grade-point average while earning a bachelor’s degree at the University of California at Riverside and graduating as a Dean’s Fellow.

Holmes’ essay details his previous work and interest in neuroscience, saying he will bring experience from his past, “specifically my strong moral upbringing.”

“My lifelong goal is to increase the efficiency of how human beings learn and remember,” Holmes concludes.

The names of the references that Holmes included with his UI application were blacked-out by the UI in releasing the documents, but one of his references from the University of California at Riverside described Holmes’ general scientific ability as “truly exceptional.”

In his application letter to the UI, Holmes said he considered the UI a leader and innovator in scientific research, where he would have the opportunity to pursue his passions in the science of learning, cognition and memory.

“Rational people act based on incentives for self-fulfillment, including fulfilling needs of self-development and needs of feeling useful and helpful to others,” Holmes wrote in his application. “I have always been fascinated by the complexities of a long lost thought seemingly arising out of nowhere into a stream of awareness. These fascinations likely stemmed from my interest in puzzles and paradoxes as an adolescent and continued through my curiosity in academic research.”