Iowa scored the first 15 points and outscored Iowa State 20-2 to start the game. The Hawkeyes held the Cyclones scoreless the first six minutes.

Senior Filip Rebraca notched his third double-double of the season and 22nd of his career, totaling a game and season-high 22 points and 11 rebounds. Senior Connor McCaffery netted a season-high 14 points, while junior Ahron Ulis cleared a personal-best seven rebounds.

Tonight was Fran McCaffery’s 500th victory as a head coach.

Iowa has won five of the last seven meetings against the Cyclones, include four straight at home.

Iowa made 10 3-pointers before the Cyclones made their first (15:16 – 2nd half). Iowa started each half making its first two 3-point attempts. All five Iowa starters made multiple triples, including Filip Rebraca equaling a career high with two.

The Hawkeyes finished the game making 12 three-pointers (nine more than Iowa State). Iowa has made nine or more triples in all five home games this season.

Iowa improved to 5-0 at home this season.

The Hawkeyes improved to 93-3 when holding opponents to fewer than 61 points the last 12 years.

Tonight was Iowa’s second consecutive game against a ranked opponent.

Today was Iowa’s fifth straight game against a team from a Power 5 conference, dating back to Nov. 25.

Iowa State will return to Hilton Coliseum on Sunday to face the McNeese Cowboys. Tipoff is at 5 p.m.

FRAN McCAFFERY: Well, I think we have a special group. They’re very competitive. They were not pleased with how we played the other night. They took responsibility. They were locked in for practice yesterday.

You’re right, they didn’t get to bed until 5 a.m. We gained an hour coming back. We didn’t talk about it. We just prepared for the next one.

We respect Iowa State, a ranked opponent. They’ve had some really impressive victories, playing at a very high level, so we knew we would have to play that way to beat them, and I think it all starts with defense. You pointed out we set the tone defensively, and that obviously helps your offense get going, and we settled in.

We had a lot of different guys contributing, as you could see.

FRAN McCAFFERY: Well, guys get hurt all the time. That’s why you have 13 scholarships. He’s out, Connor steps in, Payton is ready to go, everybody else is ready to go. Got to get some minutes out of Josh Ogundele. Josh Dix was really good tonight. Dasonte had a tough start, but he’ll be fine. You don’t talk about it; you just move on.

FRAN McCAFFERY: Well, the way I’ve typically responded to this question. I don’t consider myself having 500 wins. I’m the coach. My responsibility is to put our guys in a position to win and let them go win the game.

I’ve been blessed. I’ve worked for great people. I’ve had tremendous coaches on my staff. I’ve had really good players everywhere I’ve been. So it does make you think a little bit about — two of them are in the locker room. Mike Gesell was in the locker room afterwards. So that makes you think.

And you’re right, with two boys playing well, you think about family. I could be sitting here without the tremendous commitment of my wife, daughter right there with us, my son Jack. It’s an interesting journey. It’s a difficult journey at times. But it’s something we’re built for.

I was just really excited for them tonight, and now we get ready for Sunday.

FRAN McCAFFERY: Yeah, I think you’re right about that. It’s different when you play these guys. They play defense differently than everybody else. So how you have to manufacture shots is different.

We had a few more turnovers than we normally have, should have. But we made good plays, and we got good shots.

I said, we have good shooters. I’m not worried about our ability to make threes throughout the course — you might have a bad night. We had a bad night against Duke shooting the ball. There’s games when you hit — Big Ten tournament, what did he make 20, 21 one game and then Richmond we don’t make them. That happens sometimes.

All I want them to do is create good shot opportunities and have our players take good shots. It was great to see a lot of them go in for these guys.

FRAN McCAFFERY: Well, I think Matt very eloquently put out what he’s got. A lower body injury, and I can’t tell you how long he’s going to be out. Maybe Doc Bollier or Brad Floy.

FRAN McCAFFERY: Well, obviously every game that’s your intention, to play defense with that kind of intensity. They’ve done a good job with that. They have.

We have at times. We’re an offensive oriented team, so we’re going to try to score 90. We’re going to go. So then you’ve got to make sure you keep fresh bodies out there.

The impressive thing is we had four guys 30 plus minutes and one with 28. The fact that we were able to do that was a credit to their competitive instincts, and I couldn’t be more proud.

I think as coaches, and I said this to the team after the game, we put a game plan together, and we instill an offense and we have defensive concepts that we teach, but when they toss it up, it’s all about competitive desire, and our guys were spectacular in that area tonight.

FRAN McCAFFERY: Oh, there’s no question. He did this every night over there. We talked about it before, but last year he comes in, he’s a starter, he was an integral part of a Big Ten championship team, but everything is new. You don’t treat him as a freshman because he’s not, but terminology is different, how we scout is different, how we travel is different, who we’re playing is an upgrade from what he saw before.

It stands to reason that in year two with the experience that he’s gotten, he would be ready. But at the end of the day, with Filip Rebraca, he’s a gamer. He will fight you, and he takes full responsibility. He was pretty good the other night, but he missed a couple shots that he normally makes, and he was really upset about that.

But he’s going to keep coming. Boy, was he impressive tonight.

FRAN McCAFFERY: I’m okay with it. I never told him not to. He shot some when he was there. He brought it up in the recruiting process that he wanted to have — I said, look at Luka; he shot it whenever he wanted to. I’m not going to say anything to you.

FRAN McCAFFERY: Well, I think that’s what makes him special. If ice side ball screens, we’re going to hit the short roll. Everybody does. Okay, what happens next? You’ve got to be able to make a play from there. It’s great, you’re going to be open; you might have a three on two or a three on one or two on one, but do you over-penetrate, do you shoot a runner that’s a bad shot, or do you hit the open man? Do you drive it some, kick it some? His decision making in that role was really special tonight. He does lack a couple inches at times, maybe 15 or 20 pounds, but he is so physical and so strong, and he’s got tremendous athletic power, so it doesn’t really affect him.

FRAN McCAFFERY: They were a little animated, yeah. Yeah, you’re right, I think that’s a good point. They grew up watching it across all sports, football, women’s basketball — they’ve been going to games since they were in elementary school, and they’ve been involved with some big wins. Last year was a tough loss, so they had to endure that.

They know what it means to the fans. But they also I think are sophisticated enough to know this is a big win for the program, and when you beat a ranked team and look at who they’ve beaten, we had a great crowd. We’ve had some rough luck with when our other games have been to get our fans here, so tonight was really good.

FRAN McCAFFERY: If you notice I’m not wearing the same clothes I had on. (Laughter).

FRAN McCAFFERY: I don’t. I think it’s early in the process to make that determination. 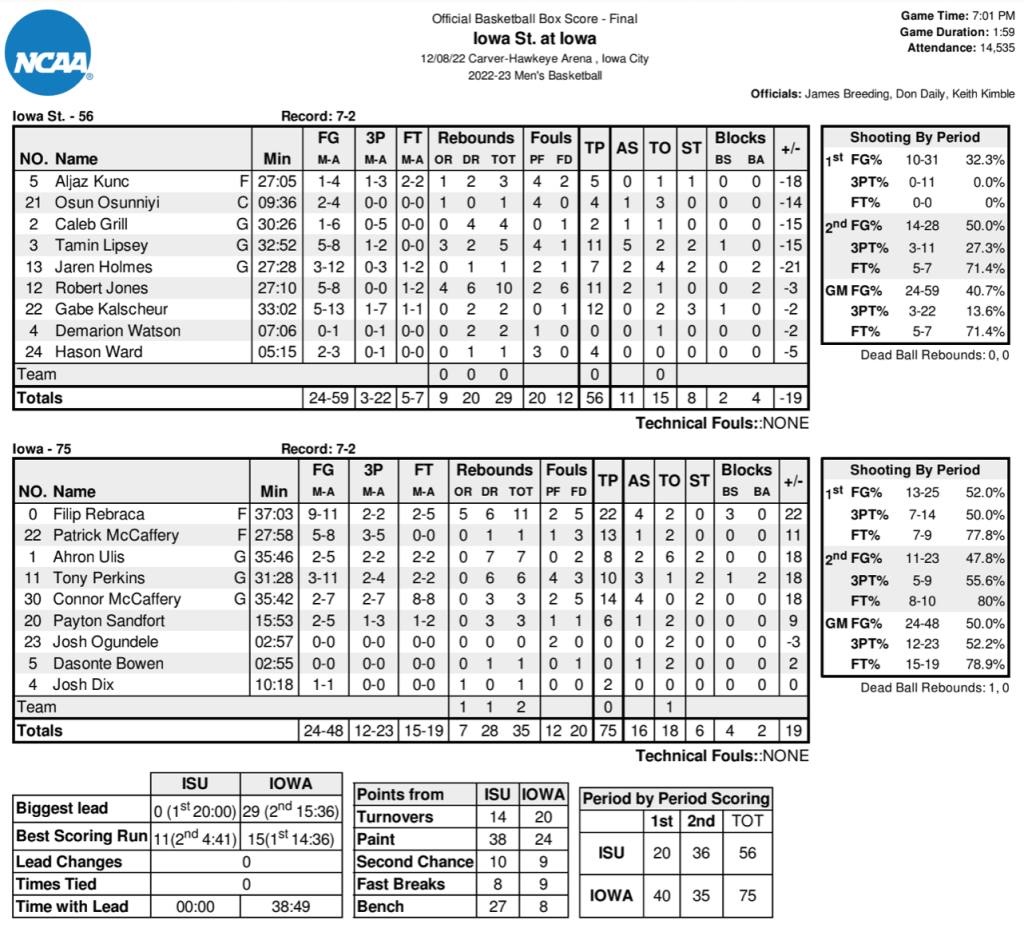