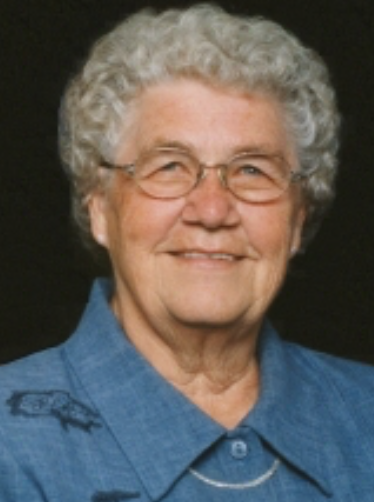 Loretta Alfa (Miller) Ricklefs was born September 2, 1933 in Lakota the daughter of Roelf and Albertha (Adams) Miller. She grew up in the Lakota area graduating from Lakota High School in 1951. During high school, Loretta played basketball, played the clarinet in the band, and was the Band Festival Queen. She was also the very first Homecoming Queen. Following high school, she worked at a local café.

On January 27, 1952, Loretta was united in marriage to Melvin Ricklefs at the Methodist Church in Fenton. They lived on the Ricklefs Century Farm by Titonka. Loretta was a homemaker, farmwife, and enjoyed raising chickens. She even worked side by side on the farm and oversaw all the farming business. They moved to Algona in 1981 and retired from farming in 1998. Together, her and Melvin enjoyed dancing and wintering in Texas for 30 years.

Loretta enjoyed gardening, flowers, sewing, playing cards, specifically fast track, the Titonka Square Dancing Club, and playing the keyboard and organ. Loretta also enjoyed spending time with her family, especially her grandchildren. She was previously a member of the Ramsey Reformed Church in Titonka and currently a member of the First Presbyterian Church in Algona.

She is survived by her children, Larry (Jo) Ricklefs of Algona, Linda (Gary) McEwen of Eldora, Roger (Kathi) Ricklefs of West Des Moines, Marilyn (Dale) Johnson of Humboldt, and Lori (Tim) Linahon of Newton; 12 grandchildren; 15 great-grandchildren and one on the way; and many nieces and nephews.

She was preceded in death by her parents; husband, Melvin on February 28, 2019, and sisters, Pauline (Carl) Veer, Lois (Paul) Winter and Ruth Eckhart.