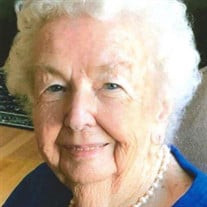 Betty, the daughter of Clara (Smith) and Julius Bollig, was born on November 20, 1930, at the family farm near Seneca, Iowa. She was the youngest of 10 children in the close-knit Bollig family. She graduated from Seneca High School in 1949.

On June 1, 1953, Betty married Louis J. Kollasch at St. John the Baptist Catholic Church in Bancroft. The couple began farming near West Bend, and later moved to the Whittemore area. Louis passed away in 1991, and Betty remained on the family farm for many years. She eventually moved into Whittemore, and then to Algona. She managed the cropland on the family farm until the time of her death. Betty had a keen sense of business and was good at accounting, and she enjoyed farm life immensely.

Betty was a woman of deep faith. She prayed the rosary every day, served in the Rosary Society at St. Michael Church for years, attended Marian conferences, and inspired people in their own faith.

Betty loved travel and adventure. She took many trips during her life, to South Dakota, Montana, Wyoming, Texas, Florida, and Canada, among several others. She encouraged her children to travel and to learn about other people and places. It is no coincidence that the typical gift for high school graduation was a suitcase.

Betty enjoyed many past-times. She was a skilled artist who, in her late 80s, took up oil painting as her newest art form. She was an avid card player and taught her grandchildren how to play also.

Betty was well known for her deep compassion, able to listen and hold prayerfully the joys and struggles of the many people who confided in her. She was a source of light and goodness to those around her.