KANSAS CITY – No. 8 Iowa State (26-5, 14-4 Big 12) was able to survive a long third-quarter offensive drought to advance past West Virginia (15-15, 7-11 Big 12) 66-60 Friday evening at Municipal Auditorium in the Phillips 66 Big 12 Women’s Basketball Championship quarterfinals. With the win, Iowa State advances to tomorrow’s semifinal at 2:30 p.m. to take on the winner of Texas and Kansas State, which was in progress at the time of publication.

The Cyclones burst out to a 21-point advantage at 49-28 before the offense completely froze up, with ISU making just four of its remaining 33 field goal attempts, allowing the Mountaineers to get back within four at 64-60 in the final seconds. However, the Cyclone defense and free throw shooting was able to ice the game away and keep Iowa State in Kansas City for another day.

Both offenses were clicking early on, with West Virginia making five of its first six shots, and the Cyclones countering to make five of eight to begin the game. The Cyclones got five-straight via an Ashley Joens 3-pointer and a Beatriz Jordão bucket to move ahead by a pair at 15-13.

A strong start to the second quarter saw ISU move ahead by seven at 26-19 on an Ashley Joens trey, but WVU battled to get it back within two at 26-24. However, the Cyclones exploded with a balanced 12-0 run, getting five field goals from five different players that saw Iowa State move ahead by 14 at 38-24. The Mountaineers went over five minutes without getting on the board, helping allow the Cyclones to take a 13-point lead to the locker room at 41-28.

ISU came out of the locker room strong, opening the period on an 8-0 run that saw the lead upped to 21 at 49-28. From there, the Cyclone offense stalled out for the remainder of the period, making only one of its next 18 field goal attempts, a stretch in which ISU also committed five turnovers. However, WVU struggled to take full advantage, only making one field goal in the final three minutes of the period as they cut the ISU lead to seven at 51-44.

Nyamer Diew got a much-needed 3-pointer to open the fourth and get the lead back to double figures at 54-44. WVU cut the Cyclone advantage to six at 56-50 on a Savannah Samuel lay-in with 5:50 to go, but Emily Ryan stepped up for the Cyclones. Six days after torching the Mountaineers for 29 points in Morgantown, Ryan scored five-straight to help keep ISU in command and preserve the victory.

Iowa State advances to tomorrow’s semifinal to take on the winner of tonight’s Texas-Kansas State game. Tip will be at 2:30 p.m. inside Municipal Auditorium and will be shown on Big 12 Now on ESPN+. 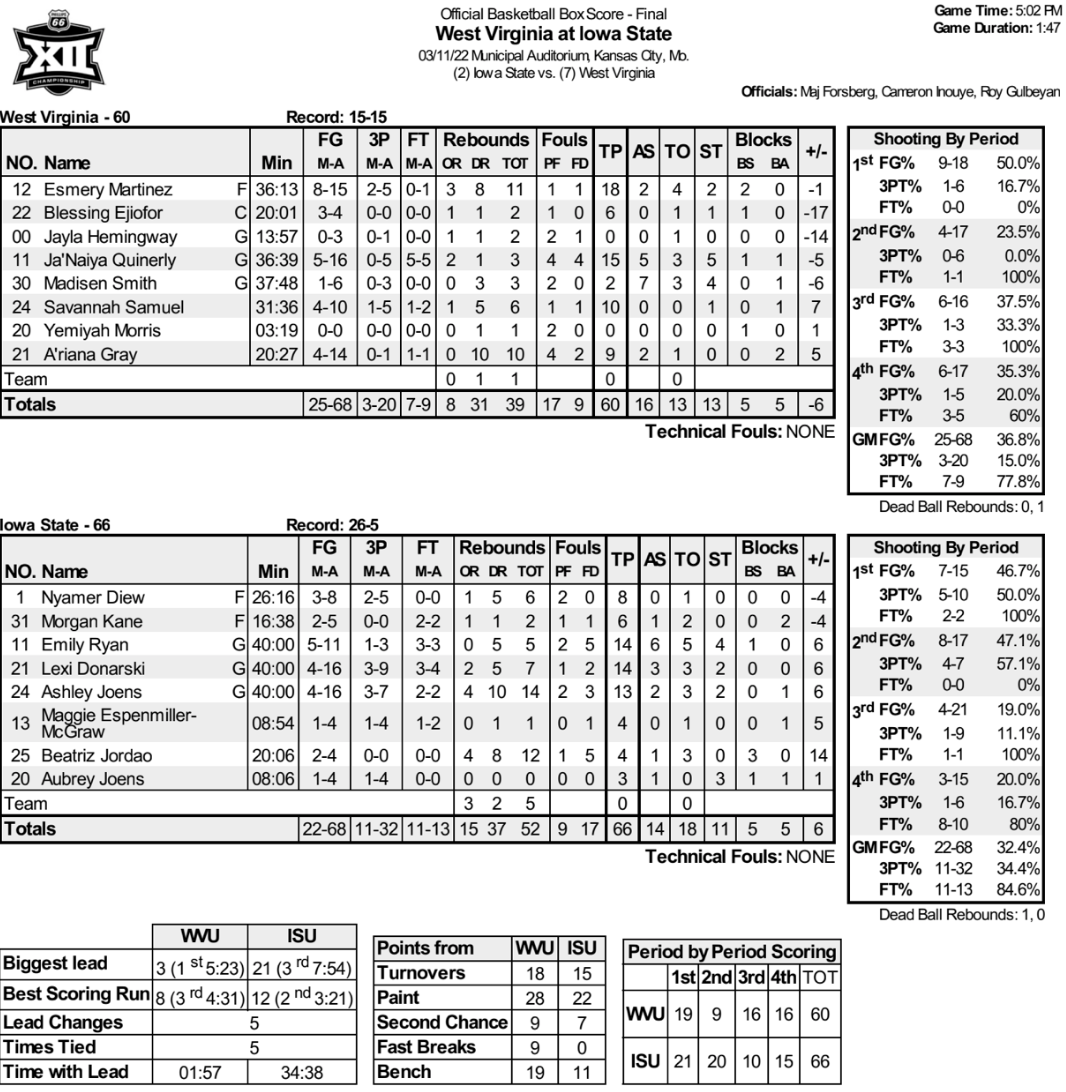