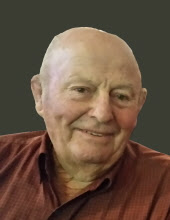 Tom was born on August 20, 1930, on a farm in northwest Winneshiek County, Iowa, to Gerald and Minnie Ryan. The family moved from the Plymouth Rock area to Ridgeway in 1942. Tom attended country schools and then went to the big brick school when they moved to a farm outside of Ridgeway. Even as a child, he took on responsibilities on the family farm. He’d bring in the cows from the pastures where rattlesnakes sunned themselves, and he learned to milk cows just as soon as he was big enough. He did well in school, and won the county competition in order to be part of the state spelling contest in 1944. He was active in 4-H and showed the Grand Champion and the Reserve Champion baby beef at the Winneshiek County Fair. Tom moved to Freeport, Illinois, to work as a dairy herdsman for the WT Rawleigh Company’s dairy farm while he was still a teenager, and he left when he was drafted to serve in the Army during the Korean War. He was stationed in Big Delta, Alaska, as a mechanic.

He met Elsie Schnur just before he began his military tour of duty, and they were married shortly after he was discharged from the Army in 1953. They moved to Waterloo, where Elsie taught school and Tom had worked for Rath Packing Company briefly, and then Tom took a job as a mechanic at Schukei Chevrolet. They rented a farm near Cresco, Iowa. Tom moved there in January 1954, and Elsie finished teaching in Waterloo and then joined him on the farm. In 1958, they bought a farm southeast of Cresco, where they lived for the remainder of their lives.

Tom is survived by his four children, Roger (Judy Twetten) of Ridgeway; Roxann, of Clive; Jean of Decorah; and Jeff of Cresco; along with four grandchildren: Michael Schmidt (Lauren McCarthy) of Clive; David Ryan of Reston, Virginia; Kathryn Kruse (Kendall) of Ridgeway; and Sara Gehling of Decorah; and two great-grandchildren, Audrey and Emily Schmidt, of Clive. Tom is survived by his sisters, Anna Myers, of Ridgeway, and Gerry Sorenson of Decorah, and his brother, Dean (Marcie) Ryan of Cresco, and his sister-in-law, Ellen Ryan of Ridgeway, and brother-in-law Virgil Henry of Cresco. He was preceded in death by his wife of 67 years, Elsie, in 2020, as well as his father (Gerald) and mother (Minnie) and his brothers Phil Ryan, Paul Ryan and Robert Ryan, and his sisters Joan McGavick and Mary Henry, and two siblings who died at birth, Norman and Shirley, and his brothers-in-law Gene Myers, Leo McGavick, and Lester Sorenson, and sister-in-law Evelyn Ryan. He is also survived by many nieces and nephews and other distant family members.

Tom’s service as a mechanic in the Army helped him to get a job at Schukei Chevrolet, and his farming experience helped him to get a job at the WT Rawleigh Company and at the Rath Packing Plant. He often said that, each time he needed a job, he was hired to start the next day. His childhood love of farming stuck with him throughout his life, and his life partner, Elsie, shared that same passion for farming, and they passed it along to their sons, Roger and Jeff.

Tom was named an Outstanding Young Farmer in 1962, after his dairy herd was the first in Winneshiek County to produce a 500-pound butterfat average. He served on the Agricultural Stabilization and Conservation Service (ASCS) county committee from 1959 to 1974 and from 1990 to 2002, serving as chairman. He practiced good soil conservation techniques on his own farm, and often visited farmers around the county to encourage them to use similar methods, which improved production and saved the soil in northeast Iowa. He was named an Iowa Master Pork Producer in 1978, and an Iowa Master Farmer in 2000. He and his sons were early adopters of computerized record keeping, which made it possible for researchers to study their farming operations over a long period of time. They also focused on water quality, and worked with Luther College for annual testing of their well water. He was a hard worker, very focused on safety, and he set high goals and then met them.

For their 25th wedding anniversary, Tom and Elsie received a gift of the compilation of the descendants of Martin and Catherine Ryan, who settled in Winneshiek County after emigrating from Ireland in the 1840s. It began a tradition of a Ryan Family Reunion each August, including updates about descendants each year. Elsie took on most of the work to collect the information and arrange for a potluck meal for those who attended. The tradition has continued every year, except 2020, and sparked Tom’s interest in genealogy.

Tom would be the first to say that any of his activities and recognitions should mention Elsie, who was by his side and working hard right along with him, while she also got involved in many other community projects. They were genuine partners in the farm operations and all of their community activities. Each was the partner that the other could rely on for support and the extra effort any group or individual needed to succeed. They supported their children’s school activities and helped them to develop and improve their farming operations, in addition to the many contributions to the community and the local churches. Tom and Elsie felt that it was important to learn responsibility, and they gave each of their children a lot of responsibility at an early age.

Farming was not just a business for Tom and Elsie, it was a way of life to be taken seriously and to be enjoyed by the whole family. They worked with an architect to build their home in order to include large windows that looked out on the farmstead, the land they farmed, and the timberland that burst into color every autumn. The house was designed to accommodate the needs of farmers and the whole family, and Elsie often created special decorations and photos to make the house a home. In their retirement years, Tom and Elsie could sit in their favorite chairs and watch what was happening on the farm, and see how the crops were growing in the fields, and admire the timberland that surrounded the farm. There was room for everyone to sit and enjoy the time together. After Elsie’s death, the home was a real comfort for Tom, surrounded by so many of Elsie’s special touches throughout the house. He was happy to be able to spend his days in the midst of beautiful memories.

Funeral services will be postponed until the weather is warmer and friends and family members are able to attend. Announcements about the event will be published in the local newspapers and online.