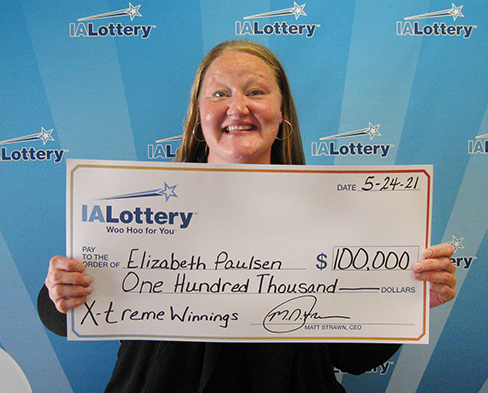 CLIVE, IOWA — A Mason City woman said she initially thought she was trying to convince herself of things when she saw a $100,000 prize on her lottery scratch ticket.

“I started scratching it and I was like, ‘Well there’s a 29 here and that matches one of my numbers. And that says $100,000, so I should probably read the instructions again because I almost made myself think I won $100,000,’” Elizabeth Paulsen said as she claimed her prize Monday at the Iowa Lottery’s regional office in Mason City. “And so, I read the instructions again.”

Still concerned she’d gotten the details wrong, Paulsen said she used the lottery self-checker at the store to scan her ticket.

“So I scanned it and it said, ‘Congratulations,’ and I was like, ‘Oh, my gosh,’” she said. “I still didn’t believe it. It’s not real until right now.”

Paulsen, 43, who works for a door-manufacturing company, bought her winning ticket at R-80, 2 Maple St. in Kensett. She said she had her 11-year-old niece with her at the time and they had fun thinking about what to do with her winnings.

“My niece says you can never have too much toilet paper or money. So we were joking that we’re going to go buy all kinds of toilet paper,” she said.

Paulsen won the eighth top prize in the “Xtreme Winnings” scratch game. She said that game stood out to her as she was thinking about buying a lottery ticket.

“This is going to do everything that I need, and a few ‘wants,’ too,” she said. “This is beyond my wildest dreams.”