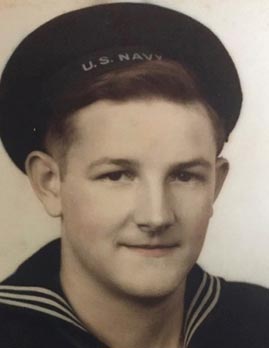 Marvin Hemann’s time on earth ended on Sunday, April 18, 2021. He spent the last 14 years of his life in the caring hands of the staff at the Stacyville Community Nursing Home. The family is grateful for the care and kindness they showed him.

Marvin Delphin Hemann was born October 22, 1926 to Anton and Alvina (May) Hemann. He was one of seven children. Marvin served in the US Navy and is a WWII Veteran. After his time in the service, he owned his own trucking company, worked with his wife Dorothy at the Cue Inn, and various other jobs until he found his place at the grain elevator in Stacyville, Iowa. He worked there until he retired in 1991. Marvin met his wife Dorothy (Blessing) Hemann through mutual friends.

They were married on December 29, 1959. Dorothy brought 4 children with her to start the family, Philip (Sandra) Henaman, Larry (LaDonna) Henaman, Sandy (Joe) Huebsch, and Dan Henaman. Marvin and Dorothy had three sons, Kevin (Jody) Hemann, Rick (Jody) Hemann, and Mike (Kelli) Hemann. Marvin loved all the kids as his own. He and Dorothy were blessed with many grandchildren; Keith, Scott, and Lisa; Larry Jon, and Jon; Melanie, Tony, Angel, James, and Jen; Shannon, Dan, Niki, and Philip; Emily, and Scott; Katie, and Cole; and Samantha.

He was preceded in death by his parents; his wife; two sisters – Irene and Alice; three brothers – Harry, Vernon and Don; brothers-in-law and sisters-in-law; his son, Philip; daughter-in-law Sandra; his grandson Scott; his son, Dan; son-in-law Joe Huebsch; a great granddaughter Lily-Mae Francis and numerous co-workers and friends.

Marvin was a gentle, kind man who was a hard worker and liked to end his days with a cold beer at the Cue Inn (maybe a Hamms). Some of you remember the Cue Inn. If you do, you knew Marvin well. Please have a cold beer in his memory.