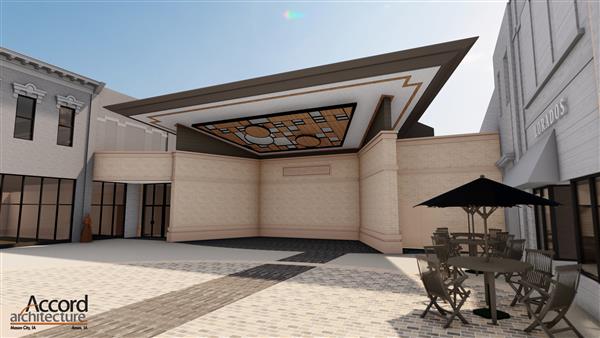 The Performing Arts Pavilion will be incorporated into the Federal Plaza entrance to Southbridge Center. It will assist in repurposing Southbridge to sustain it as a community gathering place and will also provide a quality performance venue and storage area for the Mason City Municipal Band.

The unique design, with indoor/outdoor back-to-back performance stages, features a Prairie School design more in keeping with the architecture already present on the Plaza, including the Historic Park Inn Hotel designed by Frank Lloyd Wright. Accord Architecture of Mason City worked with the City of Mason City and the all-volunteer Performing Arts Pavilion Committee on the plans.

The flexible space design will accommodate a variety of entertainment—from the large municipal band to individual musical acts. The interior companion venue will provide a rain site for performance activities such as the North Iowa Band Festival and Friday Night Live events. In addition, the annual Tuba Christmas celebration will be able to host even more performers and spectators.

The city council is expected to approve the designs at the February 4 council meeting and send the project out-to-bid on February 10. On this schedule, contractor bids would be opened on March 10 and construction will begin in the spring.

“The Mason City Municipal Band has been waiting a long time for our new home,” said Russ Kramer, director of the band and member of the Pavilion Committee. “The architects have involved musicians in all aspects of the design, and have also brought in an acoustical engineer to ensure the sound quality will be the best possible. We’re looking forward to performing in the pavilion—both indoors and out” he said.

The Performing Arts Pavilion Committee was formed in 1999 by Al Zook, Gil Lettow, Rich Dean, Vance Baird, and others with an interest in building a new performance venue. “Unfortunately, many of the members of our committee have passed away, “said Chamber President Robin Anderson, who has been a committee member since 2001. “I’m sure they’re smiling down on us in eager anticipation of this dream finally coming true.” In addition to Kramer and Anderson, John Klemas, Scott Bell, Bob Fisher, Darrell Fisher, and Dennis Higgins serve on the Performing Arts Pavilion Committee.