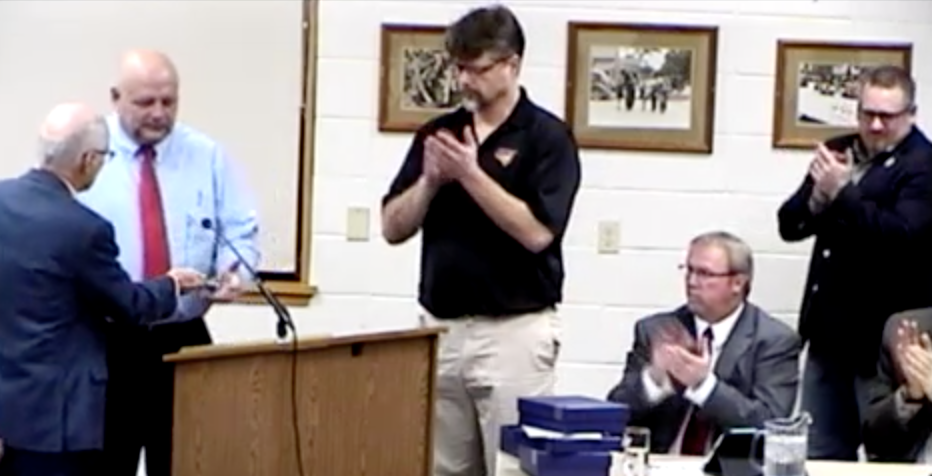 MASON CITY – An out-going city council member in Mason City snubbed an award of recognition from incoming mayor Bill Schickel after she previously made a serious accusation of possible mis-approporation of funds against him.

Prior to the city council meeting held December 19, awards were prepared for presentation to Eric Bookmeyer, Travis Hickey and Janet Solberg for their 8 years of service as mayor and council members, respectively. NIT has learned the plaques “were personally paid for by Bill Schickel” who had been elected mayor in November.

At the end of the December 19 council meeting, Schickel interrupted then-Mayor Eric Bookmeyer in the middle of a sentence – clearly irking the easily-flappable young man – for time to make a “special presentation”. Slapping his right hand down upon the desk in front of him, Bookmeyer responded “please.”

Schickel, asking his new right-hand man John Lee to join him at the public podium, then presented a plaque to Travis Hickey, thanking him for his “plain talk” as the “accountability councilman”.  Meanwhile, Mayor Bookmeyer appeared to wander around aimlessly behind the city staff seated at a nearby table, looking around the room.

To his credit, NIT learned recently that Hickey rarely missed a city council meeting, perhaps missing as few as two meetings over 8 years.

Schickel then presented Bookmeyer with a plaque. As Bookmeyer looked around the room, Schickel gave several accolades to Bookmeyer and said, “the courage of your convictions is to be admired by all of us.” His family then appeared at the council meeting; Bookmeyer said that was the first time they had ever attended a meeting.

Councilwoman Janet Solberg was absent from the meeting for undisclosed reasons and was not present to receive her plaque. She had been absent from a number of recent council functions. Schickel took her award with him back to his seat. Solberg, during the recent City elections, had accused Schickel of being involved in the possible mis-appropriation of funds that caused a City neighborhood’s roads to never be paved.

NIT was told Solberg’s plaque “was placed in her box at City Hall.”