A Brief History of Internet Memes 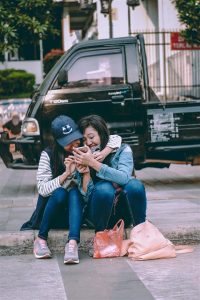 If you’re like most people, you’ve probably found yourself chuckling over a particularly funny internet meme, or feeling inspired by one with an inspirational quote that really resonates with you. Considering how much time people spend on their social networks nowadays, the odds that you’ve seen a meme or two in your day are pretty high.

So have you ever stopped and thought about when they first burst onto the scene? Where did these internet memes come from? Who made the first one? What was the goal? Let’s take a brief look at the history of internet memes.

What is an Internet Meme?

The first question to explore is what an internet meme is. There actually isn’t one solid definition as an internet meme can be so many things. It is created to share a thought, idea, or concept online and usually uses a word, symbol, GIF, video, picture, a song, an action, or anything else that could get the point across.

It tends to be that internet memes with humor in them seem to be the most relatable, which therefore gives them the most coverage. Exaggeration and sarcasm are common ingredients in a good meme. Also animals tend to be the most common subject depicted in the meme with thought bubbles or words placed on a photo or video of the animal.

You can literally find websites full of internet memes nowadays that are either trending or are hoping to hit the point of trending. Take a look at the lolhit.com site and you’ll find exactly that.

When Was the First Internet Meme Created?

While it’s impossible to trace back to the very first meme ever, you can look back to when memes first started hitting the mainstream. Who remembers the dancing baby that used motion capture? It was made famous by the hit television show Ally McBeal back in 1996. Well you can thank that dancing baby for really jumpstarting the trend.

The term “meme” was coined by Richard Dawkins however, and that was done back in 1976 in his book The Selfish Gene. From here, memes progressed to the hamster dance in 1999 and people really caught on after that.

Why Are They So Popular?

Where it used to be that people would share jokes through email, today you’ll find internet memes are usually the thing being shared. The fact is that everyone wants information quickly, they don’t have time to pour over a big long joke. So being able to take a quick look at a photo or video and read a funny saying is a much more attractive option. It’s that instant gratification that people are after.

Over recent years memes have become extremely popular where politics and politicians are concerned. A simple internet search of memes depicting President Donald Trump or his predecessor Barack Obama will give you hundreds if not thousands of hits.

So the next time a particularly funny meme lands on one of your social network pages you can now appreciate just how long they have been around and the cultural and social importance of them.