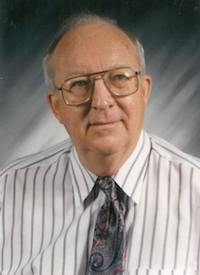 Visitation will be at Bethany Alliance Church from 12:30 p.m. until the start of the service on Friday.

Dean LaVerne Butterfield was born November 3, 1931 on a small farm near Walker, Iowa. He later moved with his family to Independence, Iowa, where he graduated from high School in 1950. After high school, Dean attended Iowa State Teachers College. While attending college, he was drafted by the Army and served during the Korean War, where he was part of an intelligence unit that made secret maps of North Korea. When he returned home, Dean finished college and received a Bachelor’s degree in Business Education. He then went on to earn a Master’s degree in Education.

On August 15, 1959, Dean married Roberta Ann Bradshaw in Waterloo, Iowa at Hagerman Baptist Church. The couple then moved to Charles City, Iowa, where they had accepted teaching positions in the school system. He taught typing, psychology, and business education. Dean was also the assistant wrestling coach for Charles City High School. In the summer, he enjoyed teaching tennis lessons for the city for many years. Dean was a well-respected teacher and taught at Charles City High School for 35 years, retiring in 1993.

In addition to teaching in the school system, Dean served in the Bethany Alliance Church as a Sunday School Superintendent/Teacher. As a faithful Christian, he always sought wisdom from his Lord and Savior through prayer. He loved to read and take notes from his Bible daily. Former students, colleagues, and friends often came to Dean for guidance and advice.

Everyone who knew Dean and Roberta could see their close connection. They seldom spent time apart. They enjoyed meeting up with friends, going for day trips, and attending local sporting events. Dean was an avid Iowa Hawkeye and Chicago Cubs fan. He revelled in watching the Cubs win the World Series last year.

He was preceded in death by his parents, Roy and Velma (Doty) Butterfield; brother, Lloyd Butterfield; and sister, Bonnie Powell.

Dean lived his life according to the teachings of Jesus Christ and talked often about his anticipation of going to be with the Lord. He wanted everyone to know about the Lord’s redeeming salvation for all.