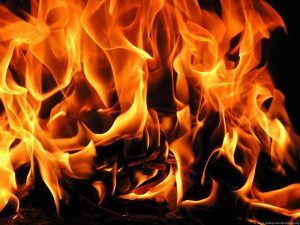 CHARLES CITY – The Charles City Fire Department (CCFD) responded to a 911 report of a structure fire at 701 Milwaukee St. in Charles City at about 9:05PM Wednesday evening.

Upon arrival, smoke was coming from a second story apartment of the 6-apartment complex. First arriving Police officers and Firefighters worked to alert and evacuate each of the apartments, as the next arriving Firefighters made entry with an interior attack of the fire. The first attack team found very heavy smoke and fire conditions immediately upon entering the apartment involved. Combined with those interior conditions, there were indications from the exterior of the structure that showed that Firefighters may be in added danger if they remained inside. The CCFD Incident Commander made the decision to immediately evacuate the Firefighters, and to begin an exterior attack on the fire.

Actual temperatures hovering around zero degrees with windchills of -20 to -30 degrees, along with a very steep roof covered with steel roofing materials made the firefight more complicated.

All occupants present at the time of the fire escaped, one of those tenants were transported by ambulance to Floyd County Medical Center for evaluation of possible smoke inhalation. No other fire-ground injuries were reported at the time of this press release.

According to Floyd County Assessor online records, the home is owned by Barry Mackey of Clarksville, Iowa.

The fire remains under investigation by CCFD investigators, and does not appear to be suspicious in nature. There is major fire damage to one apartment and the attic area, along with major water damage throughout much of the home. The CCFD was back at the station and in service around 2:30AM Thursday morning.

*** A special THANK YOU to Calvary Baptist Church who opened their doors and allowed responders to use their church as a much-needed warming place. ***

0 0 votes
Article Rating
Subscribe
Login
0 Comments
Inline Feedbacks
View all comments
PrevPreviousMason City police investigating road rage incident in which shots fired from one car at another
NextFort Dodge with meth in his sock, scale in his pocket, weed all over his car and loaded handgun sent to prisonNext