Mason City woman accused of drinking and driving with drugs

MASON CITY – A Mason City woman was behind bars for the second time this month, this time after police caught her with booze and drugs while driving a car.

Morgan Kathleen Mcmanigal, age 20, was stopped early Saturday morning by a Cerro Gordo deputy. The traffic stop was at Monroe Avenue and 4th Street NW at about 1:25 AM. During the course of the traffic stop and investigation, the deputy learned that the driver, Mcmanigal, was wanted on a warrant that was issued days earlier in connection to a domestic assault case in which she was placed on probation. The deputy apparently further ascertained that Mcmanigal was in possession of a controlled substance and was consuming alcohol. A drunk driving investigation is underway at this time.

Mcmanigal was arrested on the outstanding warrant, possession of a controlled substance and minor consumption. She was held very briefly and released.

Mcmanigal is accused of violating her probation after her arrest earlier this month for assault. She is due in court December 19. 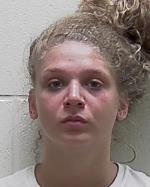