MASON CITY – A Sheffield man who led police on a chase last month that ended just outside Mason City will spend up to 6 years in prison.

Mason City police and Cerro Gordo deputies responded to a report of a suspicious vehicle Thursday morning, November 24, around 5:22 AM. Deputies were first involved in rural Cerro Gordo county near Rockwell, and the driver, 27-year-old Jared Joseph Hill of Sheffield, was stopped and arrested on Thrush Avenue just outside Mason City limits.

Hill was taken to the county jail on charges of eluding, speeding, failure to obey a traffic control device, interference with official acts and possession of drug paraphernalia. On December 16, after a guilty plea, Hill was sentenced to up to 5 years in prison on a charge of eluding at a speed of over 25 miles per hour over the limit. He received an addition sentence of 365 days in jail to be served consecutively on the charge of interference with official acts causing bodily injury.

Hill remains held in the Cerro Gordo county jail at this time as he faces a probation revocation hearing in a theft case out of Fayette county. He’ll be sent to prison once that case is settled. 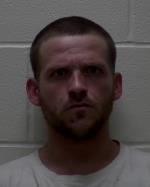 One Response to Sheffield man gets prison sentence after police chase