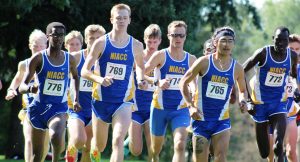 Photo of the NIACC men’s cross country team at the start of the Les Duke Invitational on Sept. 10 in Grinnell.

MASON CITY – The NIACC men’s cross country team is ranked 10th in the second NJCAA Division I poll released this week by the United States Track and Field and Cross Country Coaches Association.

Iowa Central is ranked No. 1 in the men’s poll and Iowa Western is ranked 18th.

NIACC was ranked eighth in the first set of rankings last week.

In the women’s poll, NIACC is ranked No. 25 along with two other teams. The Lady Trojans were ranked 21st in the initial poll.

Iowa Central is ranked No. 1 and Iowa Western is ranked 15th.

Both NIACC teams return to action Saturday at the University of Minnesota Roy Griak Invitational on Saturday in St. Paul, Minn.