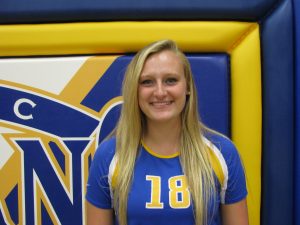 MASON CITY – NIACC sophomore Meagan Miller has been selected as the ICCAC Division II player of the week for the week of Aug. 22-28.

Miller, a transfer from Northwestern College, converted 62 of 113 kill attempts (54.8 percent) to lead the Lady Trojans to a 4-0 performance at the St. Cloud Technical and CC tournament last weekend.

Miller recorded 24 kills and 20 digs in the win over Mesabi Range CTC.

The last time a NIACC volleyball player was selected as the ICCAC player of the week was Caitlyn Hanig for the week of Sept. 1-7, 2014.

NIACC opens ICCAC play at home Wednesday against Ellsworth. Match time is set for 7 p.m. in the NIACC gym.