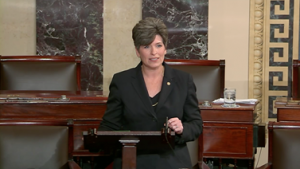 As a young second lieutenant with a degree from Iowa State University, I had high aspirations for my military career. When I was about 22 years old, it was my goal to one day command a combat engineer company.

Unfortunately, that dream was short-lived. It was 1993, and women could not enter a combat arms job field.

For 23 years, I had the honor of serving in the United States Army Reserve and Iowa Army National Guard. As a logistics officer, and after a combat deployment in support of Operation Iraqi Freedom, I joined a small circle of women in our nation who have served in a combat zone. In 2015, I became the first female combat veteran to serve in the United States Senate.

Today, the opportunity has arrived for more women to make history.

Currently, 67 women have enlisted to fill the future ranks of the Army’s infantry, and more than 238 are contracted to train for my long desired Army combat engineer job field. In the Marines, 177 have completed the Marine Corps School of Infantry and five have already integrated into combat engineer battalions. These women are paving the way with their dedication, and changing the definition of today’s servicemembers.

I write today to encourage women already in the service to take hold of this new opportunity in combat job fields, and to tell those thinking about serving that I have felt no greater honor than wearing the uniform of my nation. I fully support women having the opportunity to serve in any military capacity, as long as standards are not lowered and it does not reduce our combat effectiveness.

For decades, I have had the honor of knowing some of the most fearless female leaders who have been fighting in combat zones against our enemies, and bravely serving our nation. Now women have the ability to expand and serve in any capacity in the military.

The military and Congress have said that they are not forcing this with quotas, and I will fight to ensure that Washington, D.C., never does that. Standards must be kept. Rather, this is an open door for those willing to try and walk through it. A 35-pound ruck is still a 35-pound ruck, and whether you are changing a truck tire or carrying a wounded soldier off the battlefield, you must be able to complete that job task. I am proud to say I have met plenty of female servicemembers who can meet the standard.

Most importantly in this process, the women who have decided to join the infantry and other combat job fields need leaders and role models. As the young men and women in service reading this know, leadership is displayed at every level in the military — and our noncommissioned officers play one of the most vital roles in the chain of command.

I applaud our female officers who have completed Ranger school, and I cannot wait for our first enlisted female to make it through.

The sergeant major of the Army recently put forth a call for female noncommissioned officers to take the leap and laterally move into a combat arms job. I echo his call for enlisted leadership.

As a retired female lieutenant colonel, I make no promises that I could ever make the Army Ranger School run time, or knock out all of the Marine Corps pullups for infantry school — but I sure wish I had been given the opportunity to try.

This is a historical time to be a woman in the military, and I look forward to seeing all of the significant steps taken to lead the way for fellow women entering combat job fields.