This news story was published on March 12, 2016.
Advertise on NIT • Subscribe to NIT 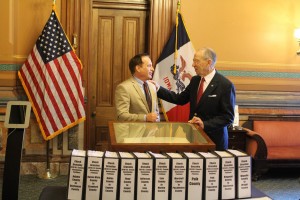 DES MOINES – U.S. Senator Chuck Grassley is undaunted by criticism lately for refusing to hold hearings for a possible Supreme Court nominee, filing many signatures Friday in a his latest quest for re-election.

“By far the largest amount we’ve received so far this cycle,” Pate said.

Grassley filed for his 7th term in the U.S. Senate. He’s been serving in the U.S. Congress since 1975, as he was previously a Representative.  He’s been in the news lately for obstructing hearings as chairman of the Senate Judiciary Committee for a possible Supreme Court nominee that has yet to be named by President Obama.

11 Responses to Grassley files for seventh term as U.S. Senator