Davenport woman who smashed cop cars is back in CG Jail

MASON CITY – A woman who ran from police in a stolen car – with four kids inside – two years ago is once again back in the Cerro Gordo County Jail, accused of violating terms of her probation.

Alexis Nicole Robinson, age 23 of Davenport, plead guilty to several charges related to leading North Iowa law enforcement on a chase in a stolen car. On August 17, 2012, a Cerro Gordo County Deputy attempted to make a traffic stop at 9th and North Federal in Mason City of a vehicle driven by Robinson, which was found to be reported stolen out of Davenport, IA. Robinson refused to stop, and deputies pursued the vehicle onto 12th Street NE, eastbound, and attempted to box in the car. Robinson rammed the rear of a Sheriff’s patrol car and eluded Deputies. Deputies then attempted to box in Robinson again, and she rammed the side of a Deputy’s vehicle, partially disabling it. Deputies were able to force Robinson to stop at the intersection of 12th Street NE and California. Four children, ages 1, 3, 4, and 4, were located in the stolen vehicle, unrestrained.

After accepting a plea deal, Robinson was placed on probation and assessed $803.75 in court costs and fees. She never made a payment, records, show, and Cerro Gordo county authorities filed for a probation violation against Robinson in January, which she was found guilty of on February 24.

Robinson was sentenced to 30 days in jail by Judge Karen Salic and is now serving that time here in Cerro Gordo County. 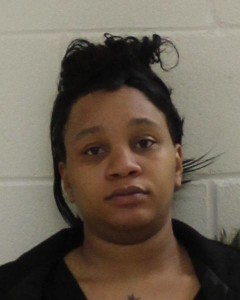