MASON CITY – More details have surfaced in the alleged knife-slashing incident in the Cultural Crescent this past weekend.

According to a source close to the situation, Jordan Holmes, age 23 of Mason City, who stands accused of felony willful injury, was standing near a group of people late on March 8 in the Cultural Crescent near Southbridge Mall with a curved knife in his hands, picking fights with people as they went by him.

A man approached Holmes and asked him to leave people alone.  Video surveillance, which has been turned over to police, then shows Holmes slashing the man across the face with the knife, and then turning and running.

The source told NIT that another man then chased Holmes from the scene “all the way to KIMT” on foot.  Holmes escaped and was wanted and sought by police for nearly two days until they caught up with him at a Mason City residence.

Holmes is now residing in the Cerro Gordo County Jail after the knife incident and subsequent arrest.  He awaits a March 21 hearing on that charge.

Now, Holmes is finding out that the second chances for him may be running out.

On Thursday, police have served Holmes with a new warrant for probation revocation related to a separate incident from last December, where Holmes allegedly fled from police, drunk, and was later caught at his house. He was charged with operating under the influence, failure to use headlamps when required, interference with official acts, failure to maintain control, eluding law enforcement, assault on a peace officer, and driving while suspended.

In typical North Iowa justice, some of those charges were dropped – including the operating while intoxicated charge, as Holmes plead guilty in February to assault on a peace officer and eluding. He was assessed $1,222.75 and placed on 2 years of probation, as a 2 year prison sentence was suspended.  He will have a hearing on that matter on April 23. 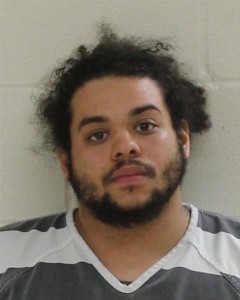